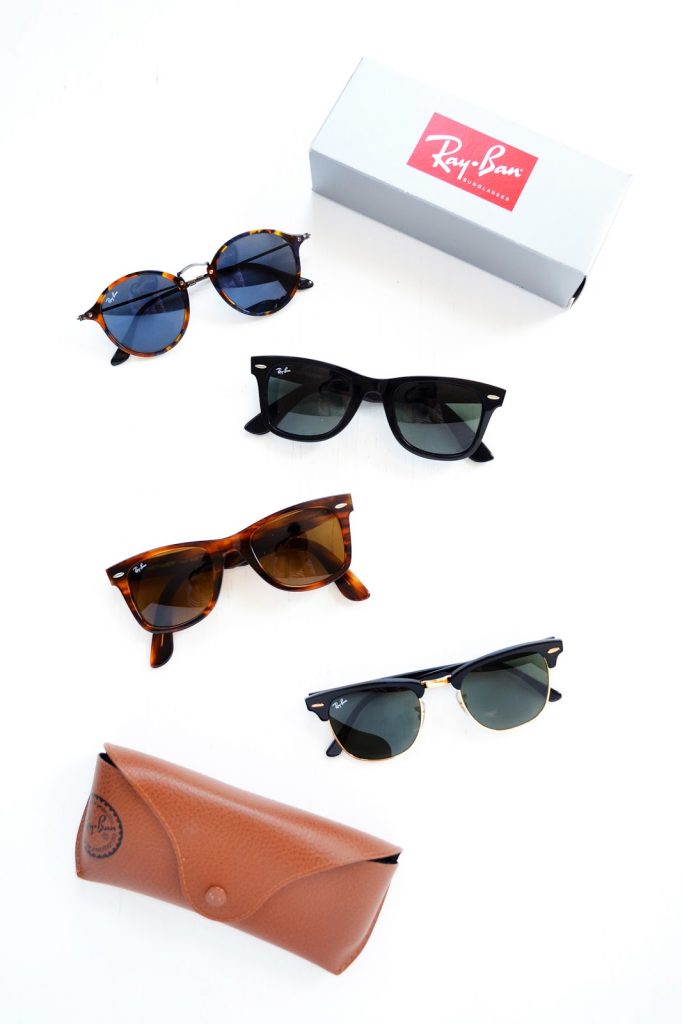 With something as expensive as Ray-Ban sunglasses, you’re going to want to pick the most suitable pair. As a leading brand of sunglasses, they are the most copied, and most coveted; everyone wants the real deal. My dad has a pair from the 80’s which he still wears to this day (and doesn’t look outdated whatsoever. Such a cool cat). Their trendy, yet classic styles will truly last forever – a fashion must-have that is well worth the money! 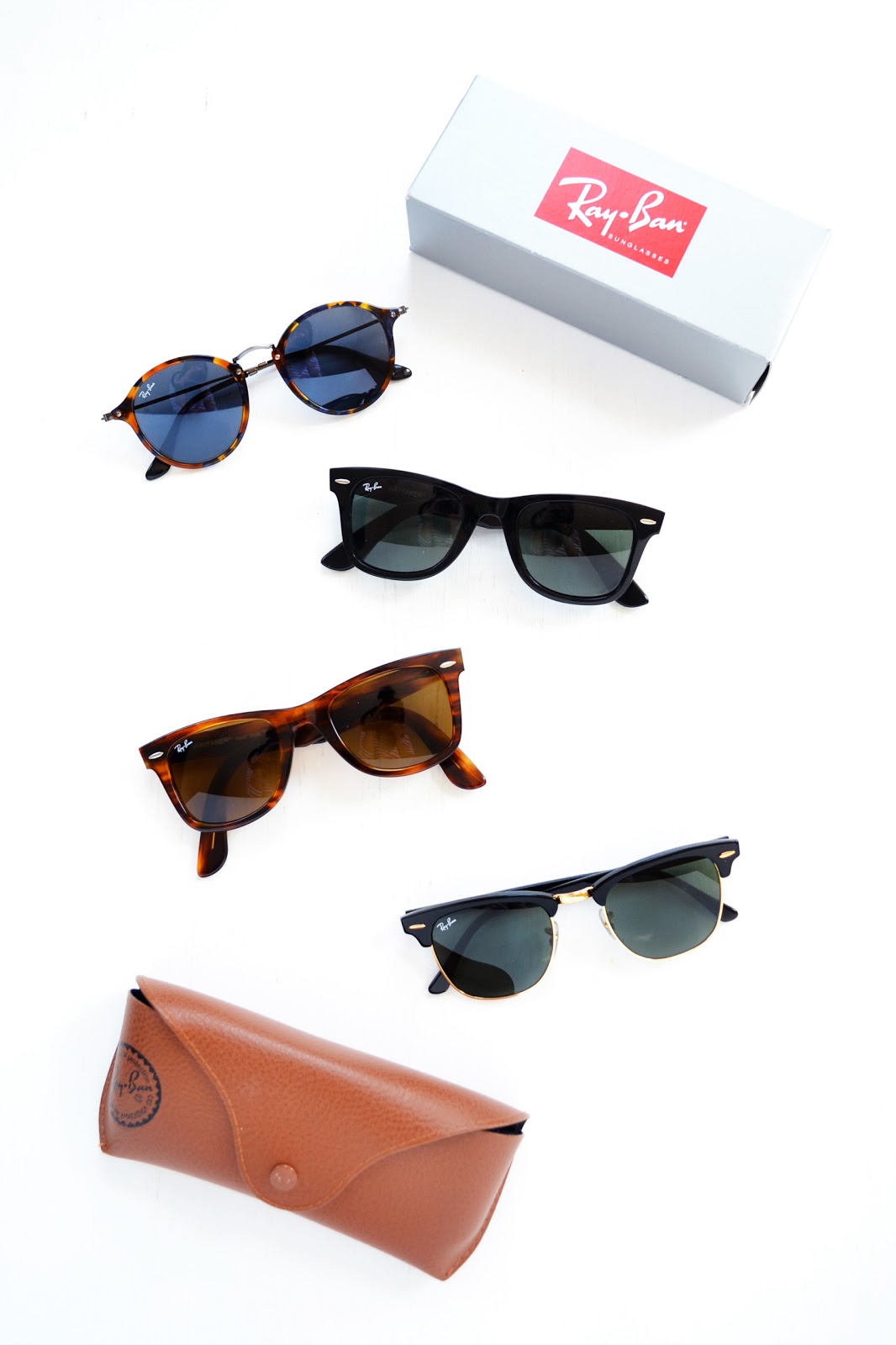 Ray-Bans: Pick Your To Perfect Pair

When I first decided that I wanted to buy pair of Ray-Ban Sunglasses, they were around £90 – £120 (they still are), but since then, I have discovered that you can buy genuine RayBan sunglasses from Sunglasses Shop online for cheaper. And they often do promotional offers too, so look out for those all important extra discounts (Just a heads up, the turquoise Clubmasters I’m wearing below are currently £68!). 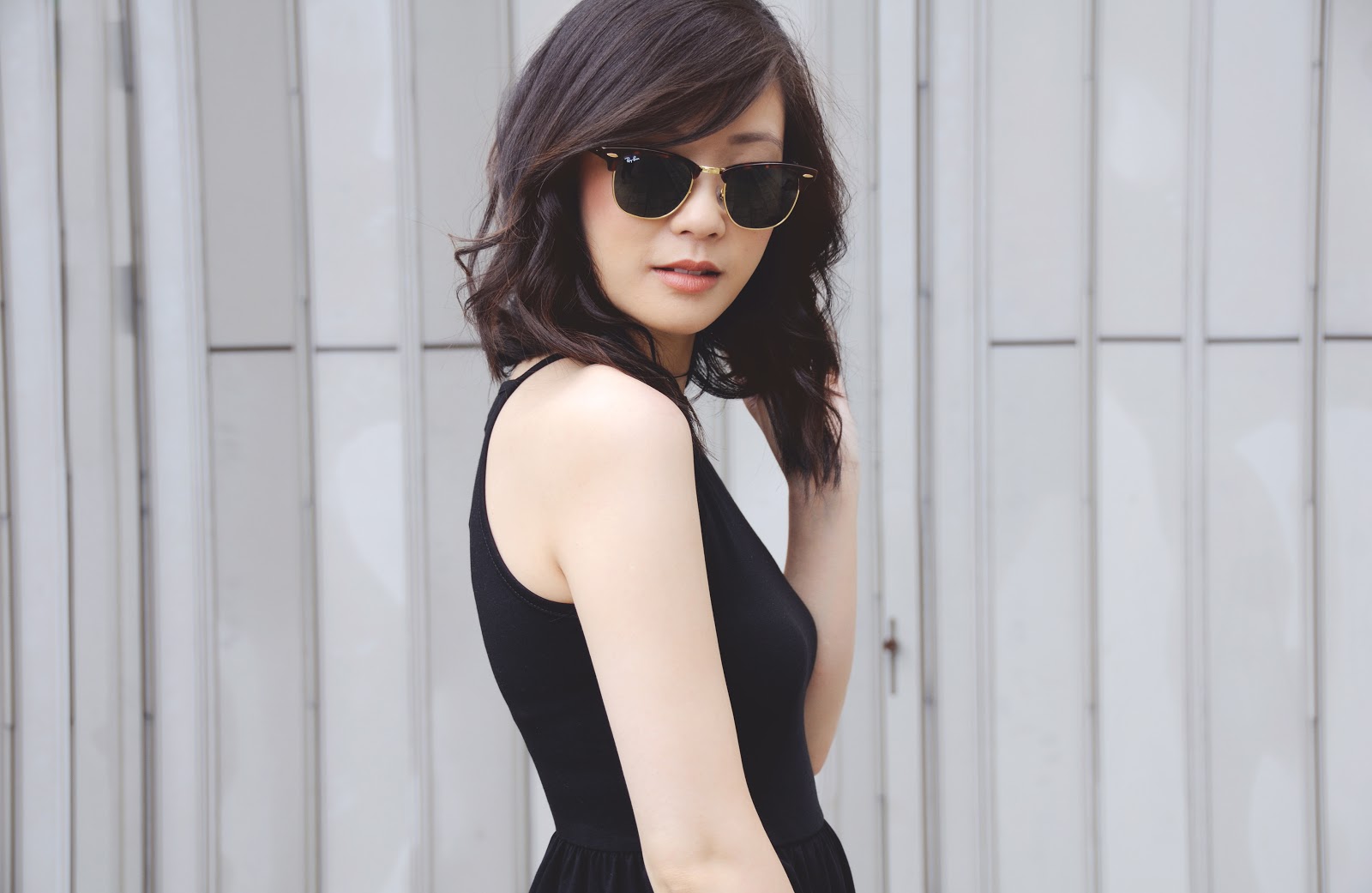 With so much choice in style, lens colours, frame colours, sizes… it can be a bit overwhelming as to which one to pick. You want to make sure you’re buying the right ones for you. Which pair of Ray-Ban’s do you go for? Which ones would best suit your face shape? Which frame and lens combination?
Sunglasses Shop have put a guide together to help you find the right pair of Ray-Ban sunglasses (plus the chance to win a once-in-a-lifetime trip to New York! More details at the bottom of the blogpost!)
But I thought it would be helpful to take you through my Ray Ban collection, along with links to photos of them on my face, to help you decide if you are considering buying a pair! 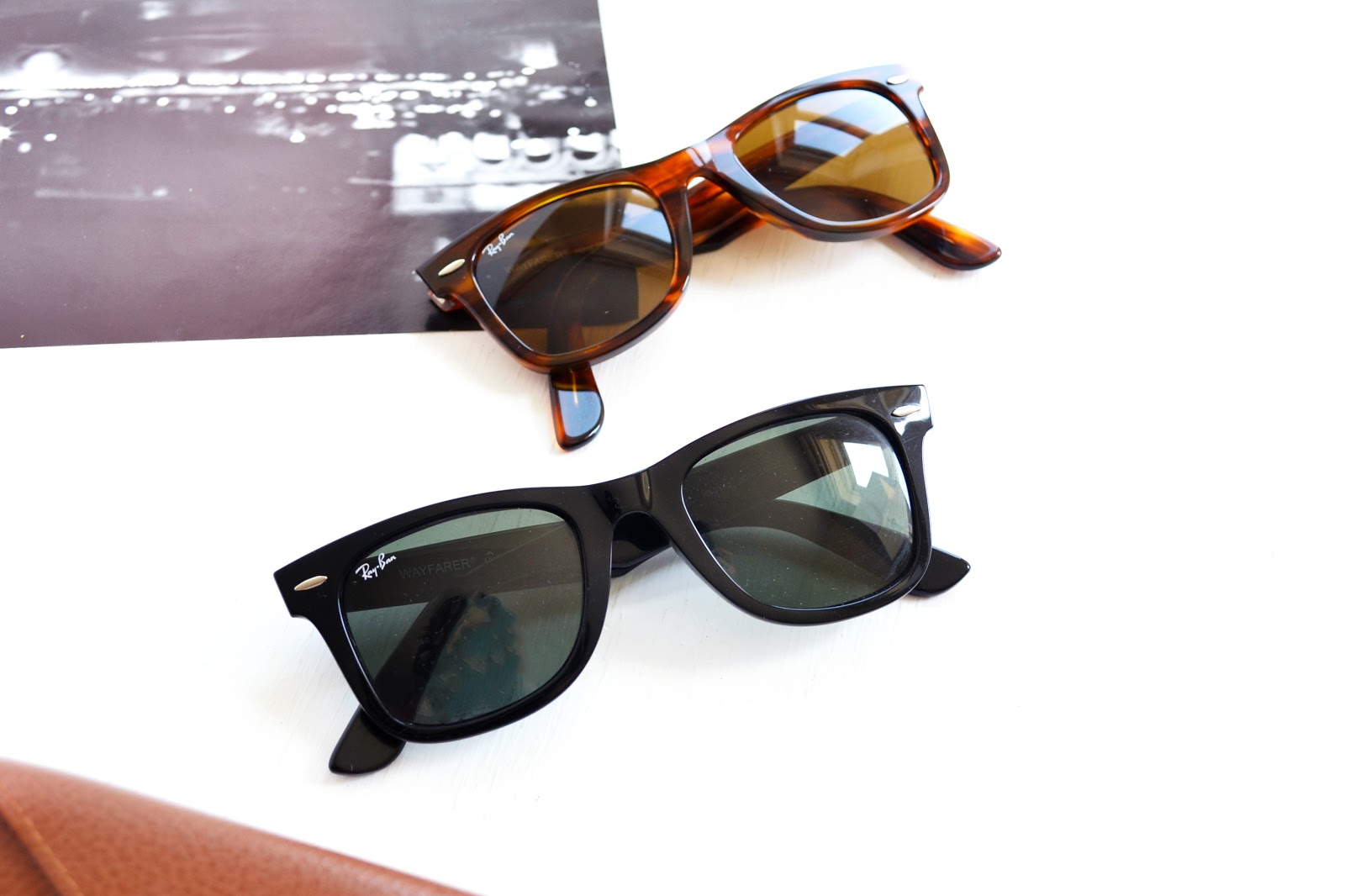 Obviously, Ray-Ban Wayfarers are THE CLASSICS. There’s no question about it! It’s such an iconic shape and there are so many imitations around, every high street has their own version. But if you’re going to go for this classic, angular shaped frame, go for the real thing, because it’s a style that will never go out out of fashion. Wayfarers suits everyone!
They come in 3 sizes; 47mm (small), 50mm (medium), and 54mm (large), and in an array of colour and lens combinations. They even do a matte frame and ones that fold in!
Both of mine are 47mm. The Black has got green tinted lens, and the Striped Havana frames with the brown tinted lens.
I love wearing the black pair with a more edgier outfits, whilst the havana pair with pretty, summer dresses – the tortoise shell already reminds me of a French Riviera, kind of style. You know, breton stripes, white capris, head scarf, beehive, bright red lipstick.

The only thing about these sunglasses is that frames are angled in so not ideal on days where I feel like I’ve got hamster cheeks. 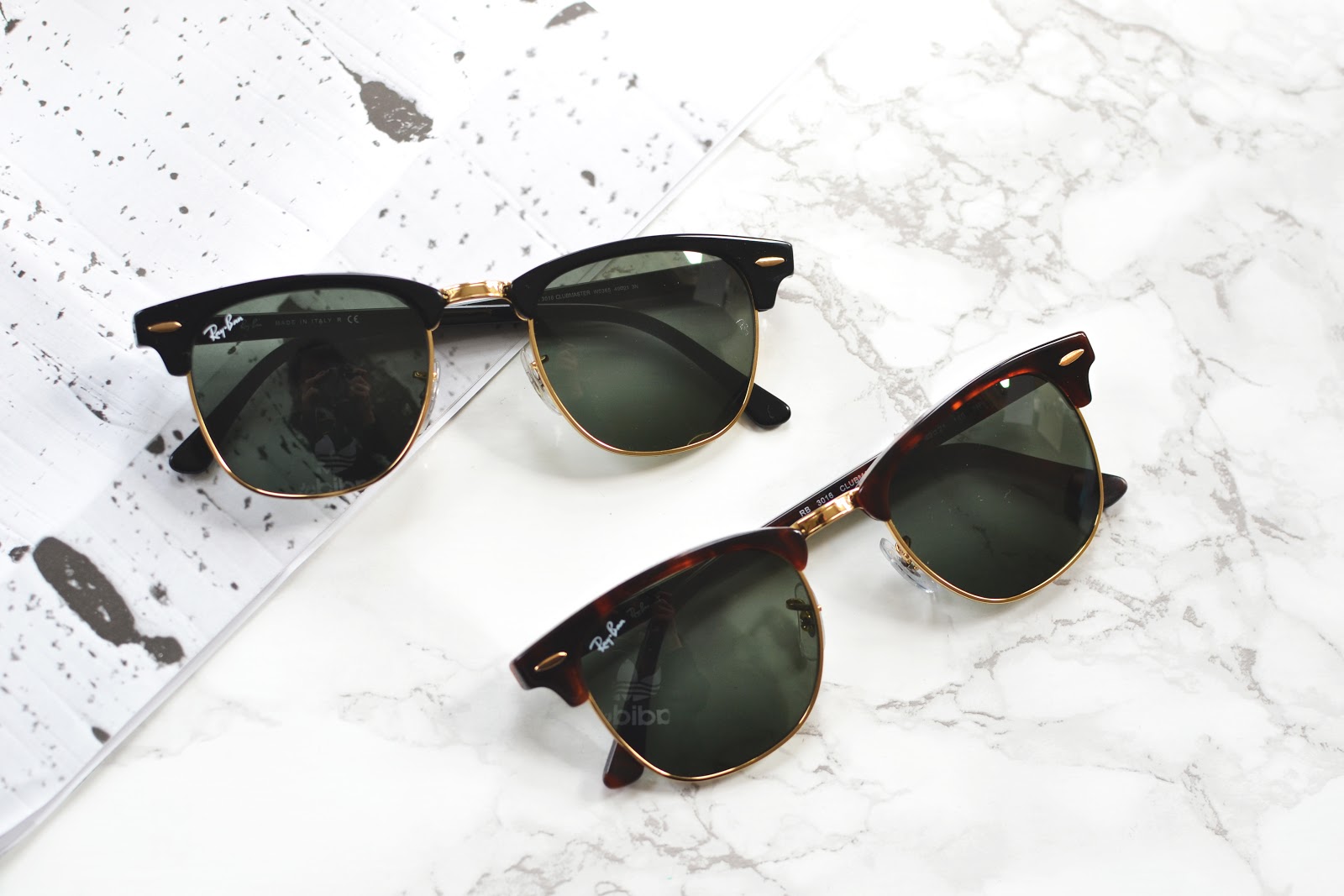 Ray-Ban 3016 Clubmasters
I actually kind of regret getting the black/gold Clubmasters. I LOVED them at first but then I decided it didn’t particular suit me. It just didn’t feel right. I looked like a 90’s Michael Jackson. I guess it felt like the black/gold combo was too flash or something. I still wear them, but only with certain outfits. but there’s no denying that they’re not as versatile as the Wayfarers.
Then my sister bought a pair of Clubmasters in the tortoiseshell and I thought they looked much more casual and relaxed than the black pair. I failed in my attempt to get her to swap with me, so when Sunglasses Shop offered to gift me a pair of sunnies (making me feel like the luckiest girl in the world!), I went straight for the tortoiseshell in 49mm size.
I know that from the photo, it doesn’t look like a huge difference between the black and tortoiseshell, but it is more noticeable in real life.
In my opinion, because of the gold rim, I think it’s nice to keep the lens in the unfussy, classic green, but with all Ray-Bans, the Clubmasters come in all kinds of combinations, including gradient flash mirror lenses. Wowzers.
The nose pads on the Clubmasters make them easier for me to wear and does not slip down (as much).

▸ Photos of me wearing Black Clubmasters and Tortoiseshell Clubmasters. 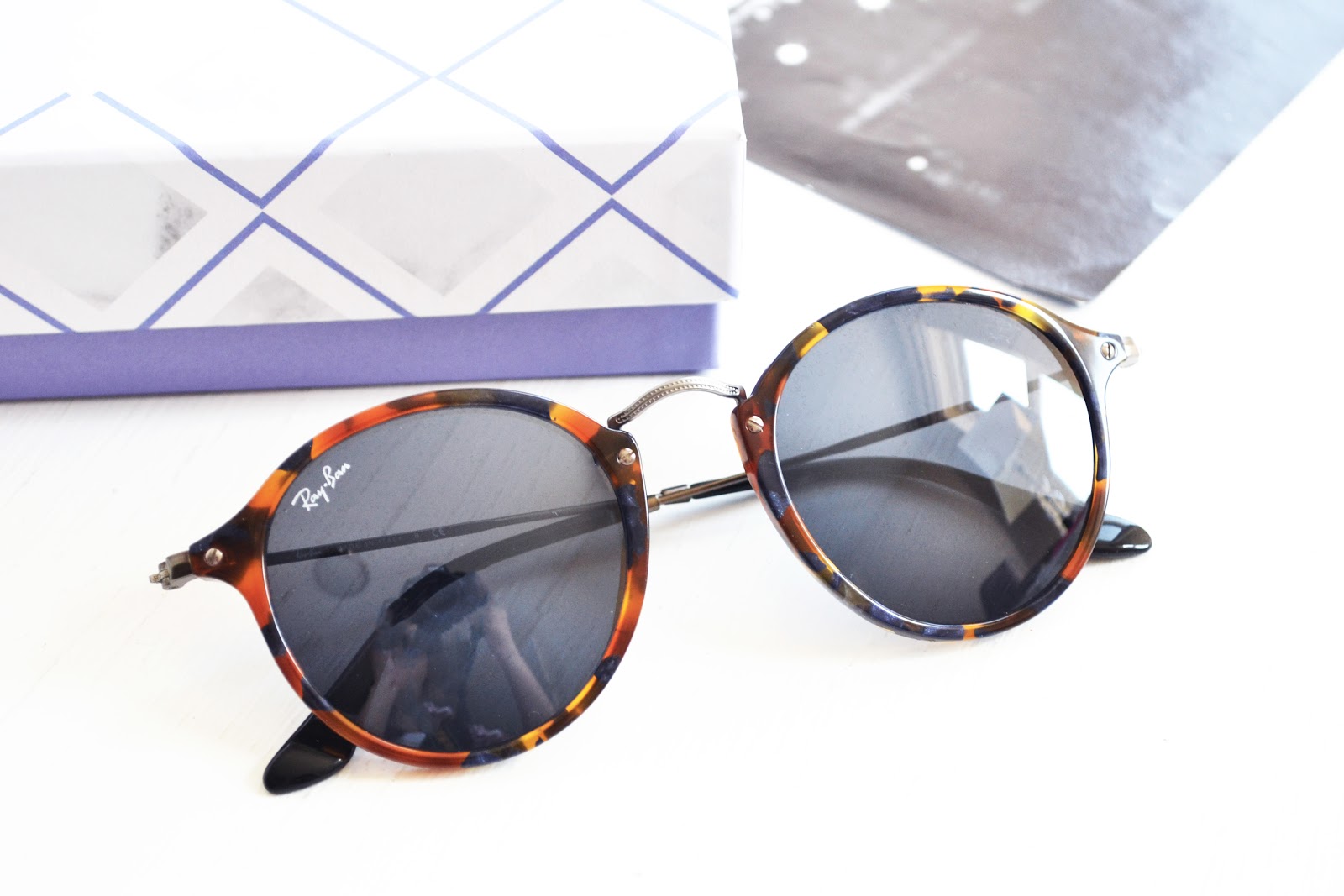 Ray-Ban 2447 Round
I love round shaped frames on other people, I think it looks so cool. I wanted to give it a go so I picked the 2447’s in Spotted Blue Havana with blue coloured lens. This is the only pair I have with blue lens, and visually, they’re fine but as a personal preference, I prefer them in green.
The frames are specks of brown, yellow, and blue – very pretty, very retro! – and unlike the others, the arms are quite thin and delicate, so I have to remind myself to take extra care and remember to put them back in it’s case instead of slinging them in to my handbag!
I believe the 2447’s only come in one size (49mm) but that’s probably the perfect size because they’re round and you don’t want them to look too big and googly on your face!
▸ Photo of me wearing Ray-Ban 2447. 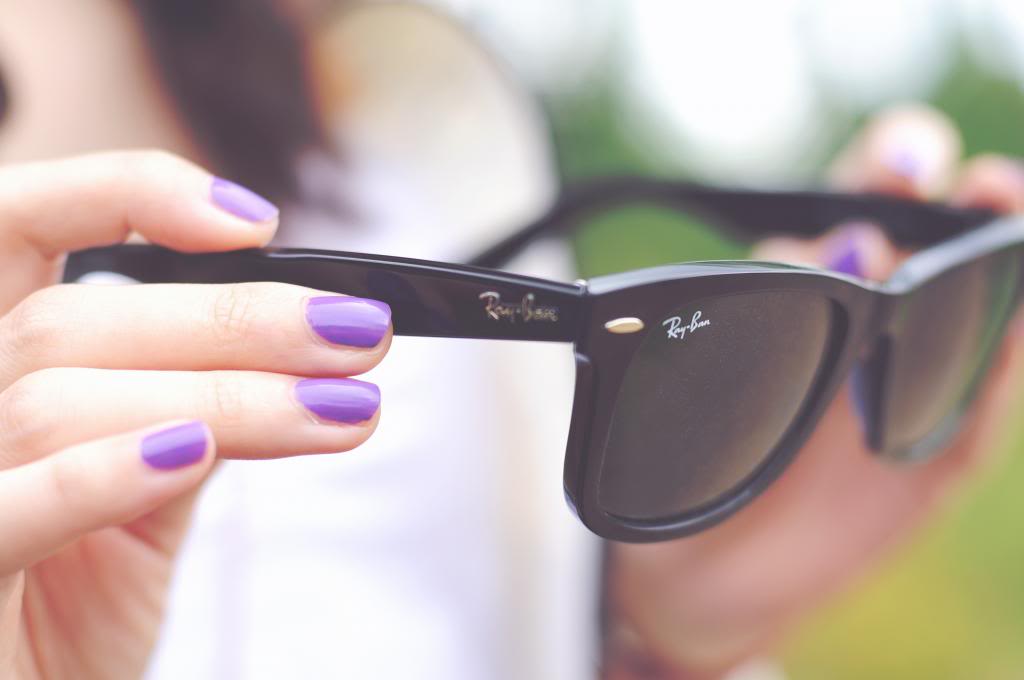 #SGSFACESHAPE Competition
Sunglasses Shop is hosting a fab competition where you get the chance to win an exclusive trip to New York! To enter, all you have to do is take a selfie in your Ray Ban sunglasses (could be yours, or borrowed from a friend) and post on social media using hashtag #SGSFaceShape and tag @SunglassesShop.
There’s also an option to use their colour-me-in if you don’t have a pair of Ray Ban’s. The closing date is 28th August and all of the details can be found here. Good luck!
▴ Follow Me On Twitter ▴ Like My Facebook Page ▴ Follow Me On Instagram ▴

11 Fashion Must-Haves You Need This Autumn
Wearing My Sunday Best
How to Style: Tartan Dress from Primark
The Cutest Tiger Shirt! Ever!
Share this post: