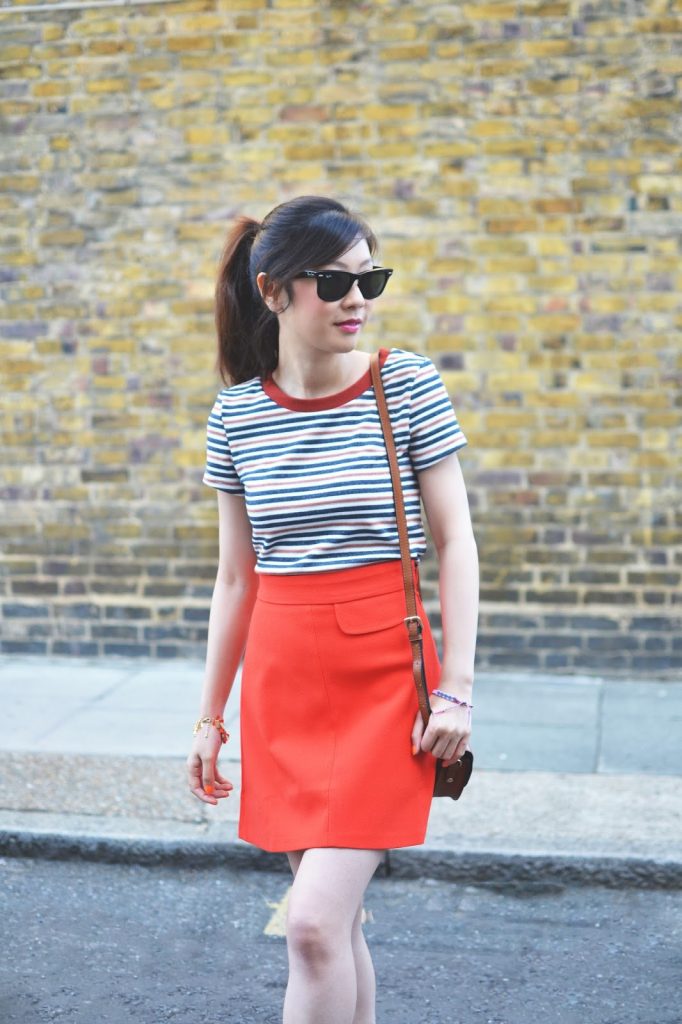 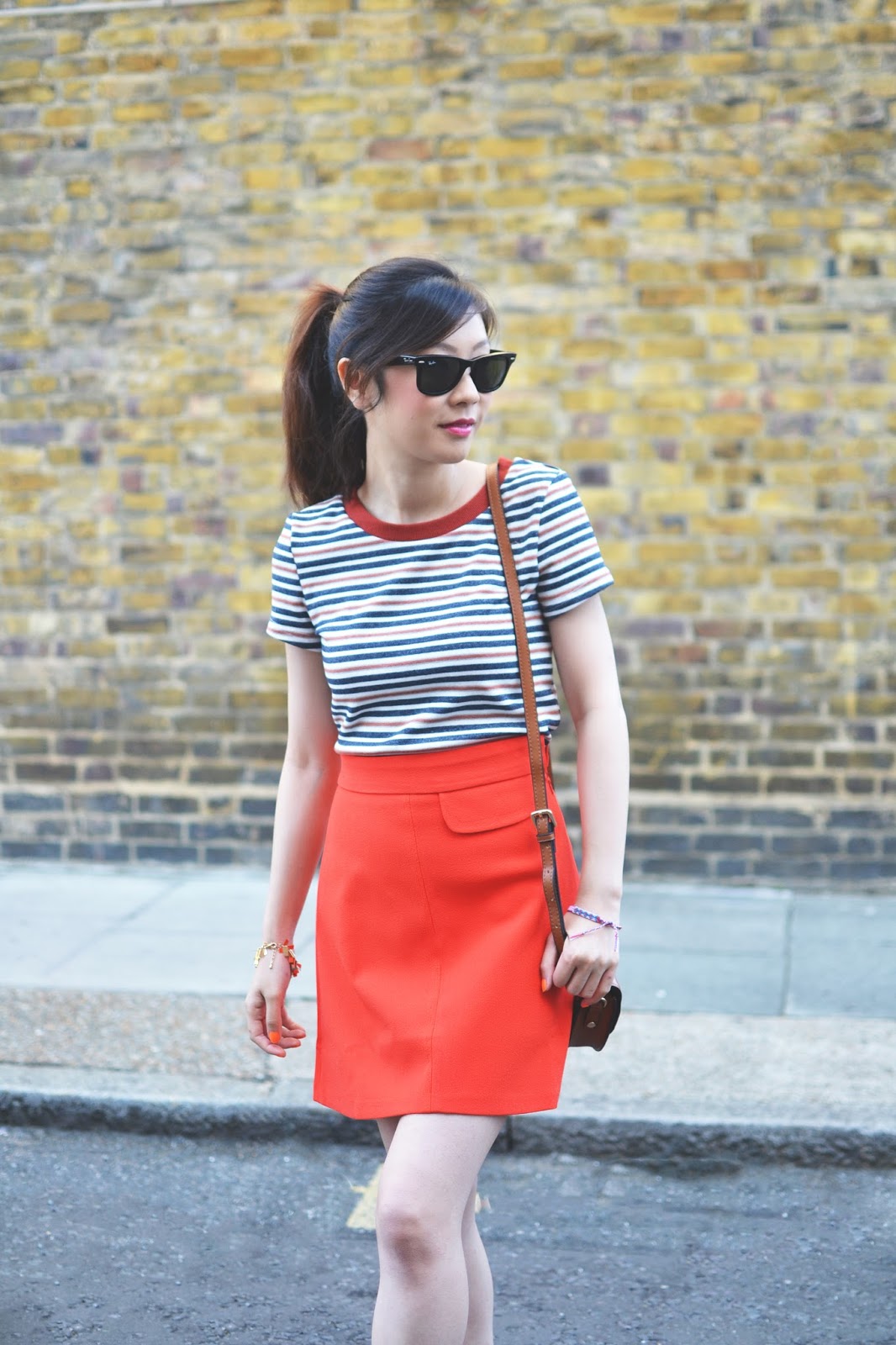 I was sooo super excited when I was asked to work with Kinder Bueno on this blogpost because… well, I LOVE eating a Kinder Bueno (who doesn’t?!), they’re my fave chocolates snacks! I love the creamy hazelnut filling and the melt-in-your-mouth chocolate covered wafer –such a great combo. I think anyone would be pretty chuffed to be asked to work with them, and I thought it was cool to accept the challenge because it would be out of my comfort zone (and God knows I need a push!).

A STYLE CHALLENGE INSPIRED BY KINDER BUENO
Even though I was mega excited to work with them, I felt a bit nervy about the brief. Not that there was anything wrong with it, there totally wasn’t – and after all, I was the one who pitched the idea to them! – but we were asked to come up with an outfit inspired by Kinder Bueno signature colours. When I saw the words “shades of orange and brown”, I sort of panicked, not going to lie to you! I mean, my first thoughts were “How the hell am I going to pull this off?! Exactly who is going to pull off a bright red orange and chocolate brown? Not me!” But all I needed to do was be a bit creative and open-minded. If it’s one thing I’m good at, it’s styling! Keep calm and dress in Kinder Bueno colours! 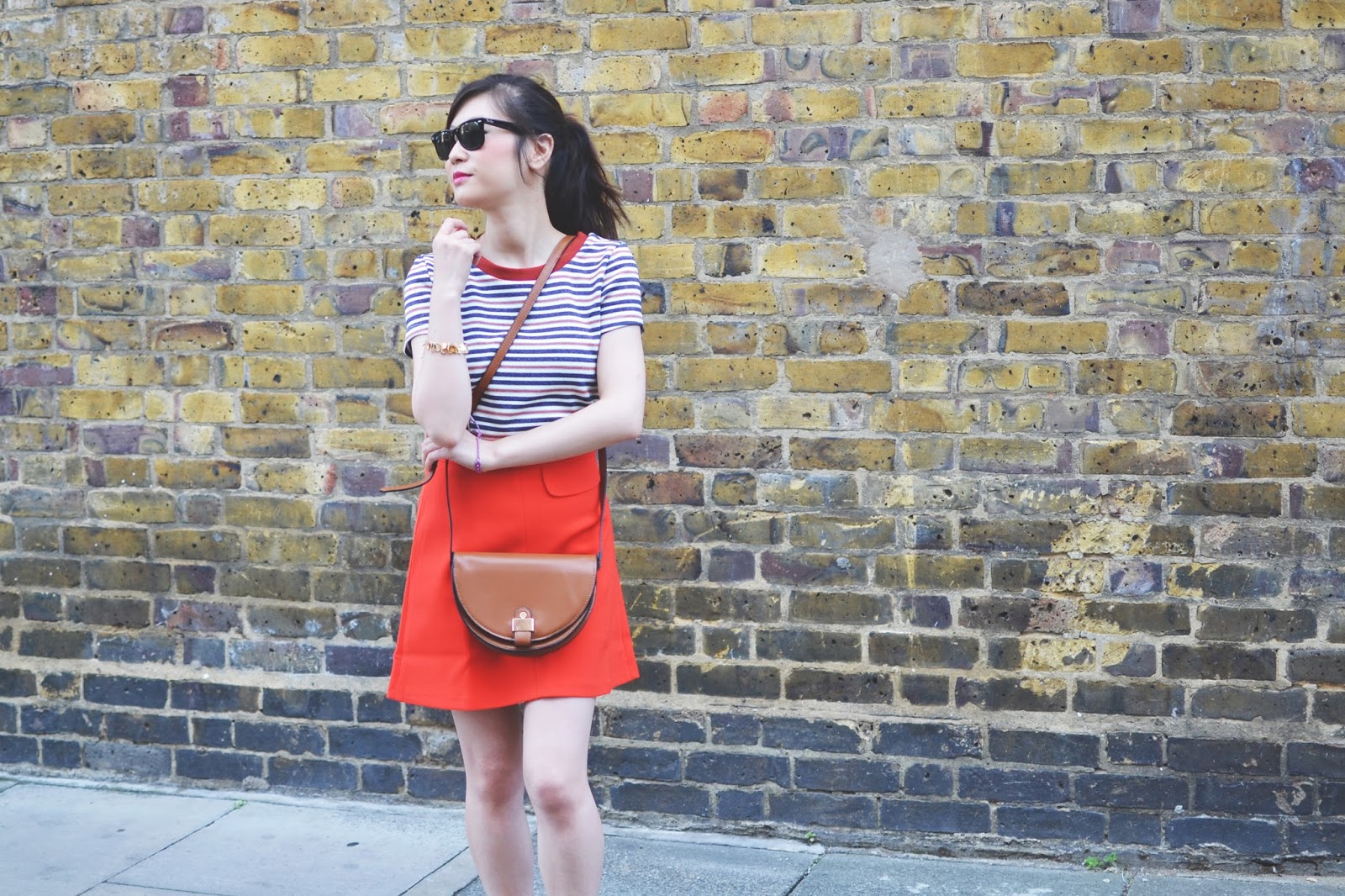 Recently, I’ve kept to a plain style, wearing jeans with white t-shirts and then plonking a pair of battered-to-death, on-its-last-legs Converse on. I needed to be dragged out of my style rut and this was going to be the glorious moment! This style challenge was actually a challenge for me because there aren’t that many shades of orange, chocolate brown and milky beige that suits me but I think I’ve managed to make it work! 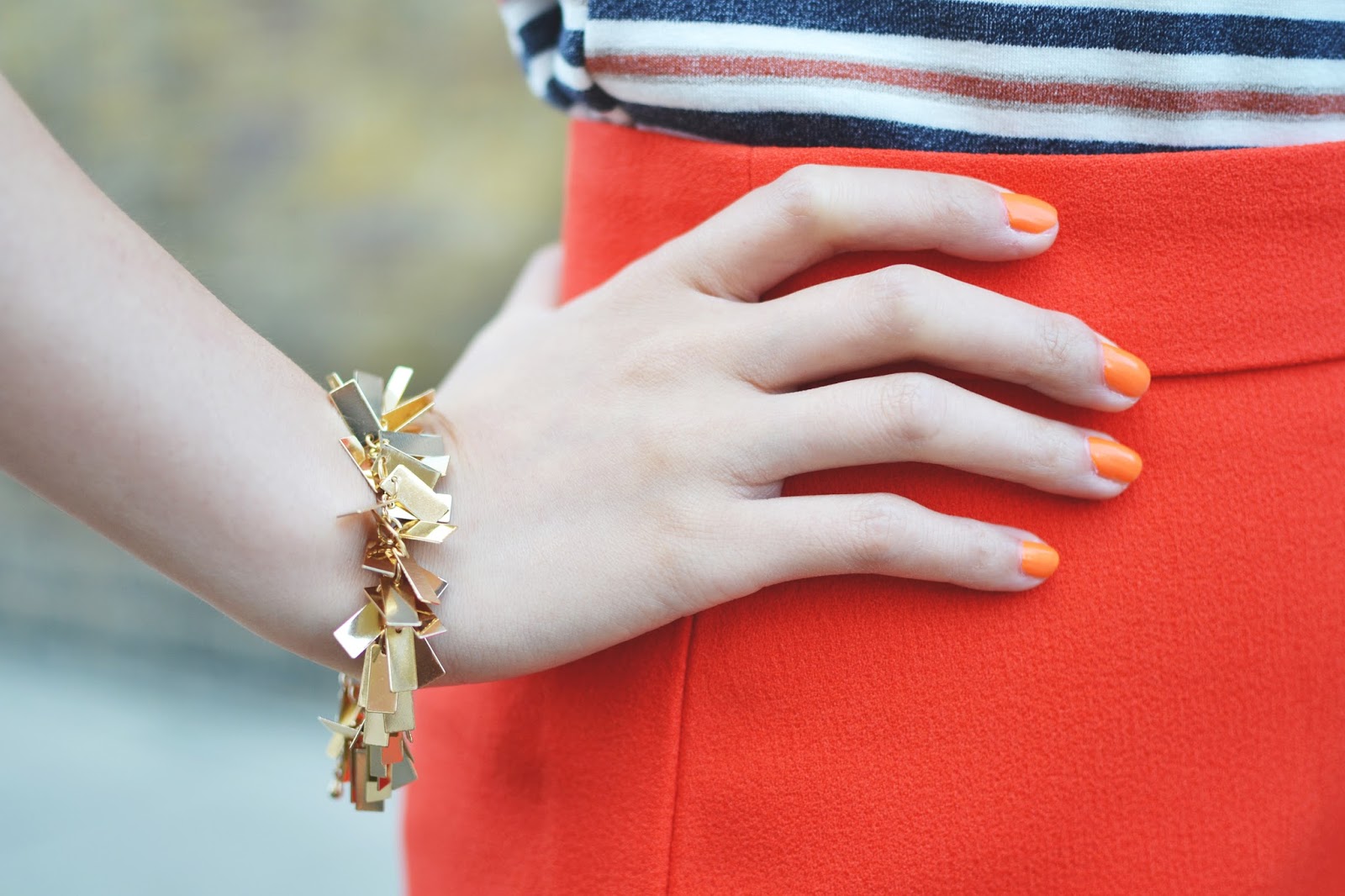 I ended up having quite a lot of fun picking out some clothes and I was really excited to try a new colour and also give the A-Line skirt a second chance! You don’t realise it at the time but something as small as a style challenge does force you to think outside the box, and you it’s a positive thing because you end up trying something that you wouldn’t normally go for! And when you get it right, the results are pretty darn rewarding, not to mention it instantly boosts your confidence making you feel like a ‘brand new you!’ (Cue the hair-flick). Here’s a quick run down of my Kinder Bueno inspired outfit includes the following: 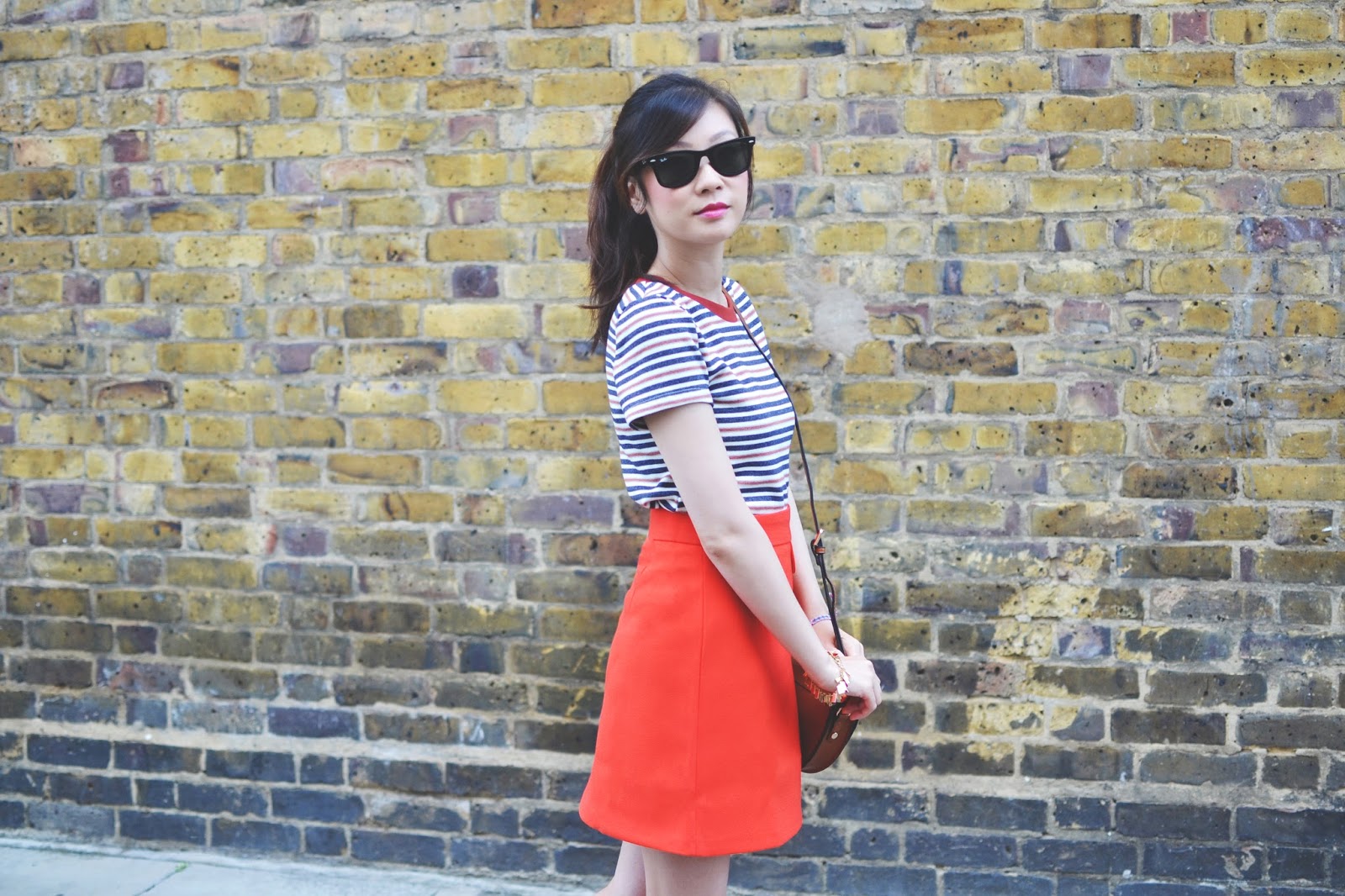 Orange / Brown A-Line Skirt (ASOS)
The orange / brown was my starting point because it’s such a strong signature colour of Kinder Bueno, so I wanted to make sure that I was able to represent this element in the outfit. I think the skirt is really adorable and the red-orange is spot on. It’s so totally Kinder Bueno! I have been wanting to the A-Line skirt trend for ages and now I have an excuse to give it a go!

T-shirt (Glamorous Clothing)
Even though I was very tempted to pair the skirt up with a smart, white blouse (which is what I would normally do if I’m sticking to my own style),I had to remind myself what the challenge was and what style direction I was going in. Going for a 70’s look, I decided to pick a retro looking t-shirt to go with my vibrant-coloured skirt. I really LOVE it and it reminds me of what my Mum used to wear when I see photos of her from the 1970’s. There are hints of orange in the t-shirt there so it ties in extremely well with the colour theme!

Bag (ASOS)
Of course, I had to go for a brown bag! Whilst dark brown doesn’t suit me, I have no troubles with a rust or a tan shade. This would be the chocolate or hazelnut element of Kinder Bueno, which works well to accessorise the whole outfit. I didn’t want a bag too large for such a girly outfit, but I definitely wanted one that had enough space to store my daily essentials and one pack of Kinder Bueno!

Do you think that you could pull off these colours? Why don’t you give it a go and try this style challenge for yourself! You might just be in for a surprise!

Upload your Bueno Selfie using the #DELICIOUSLYBUENO for your chance to WIN a designer bag filled with delicious Kinder Buenos! T&Cs apply. To find out more visit HERE!