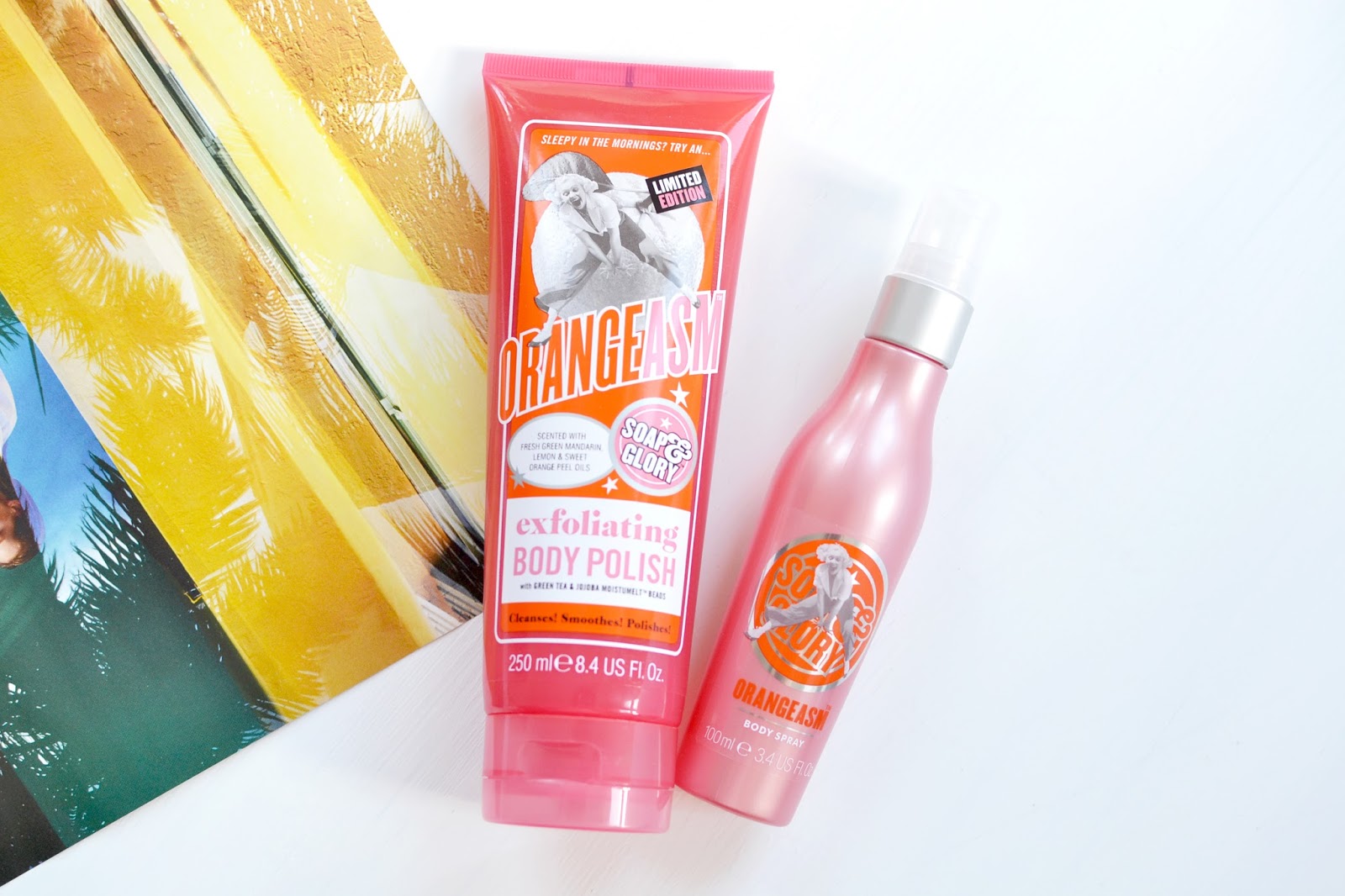 Orangeasm was Soap&Glory’s huge launch last Summer in which saw them release their first fragrance mist, a new body wash and a body butter to the range. This Spring, they’ve added an exfoliating body polish and a body spray to the Orangeasm line.
I’m aware that Orange scented body products are quite hit and miss, and not everyone wants to have the linger smell of oranges on them all day long, but Soap&Glory’s Orangeasm is really nice. In the past, I have described it as a creamy orange as opposed to a citrus kick. It’s more like the zest of an orange than the juicy flesh. 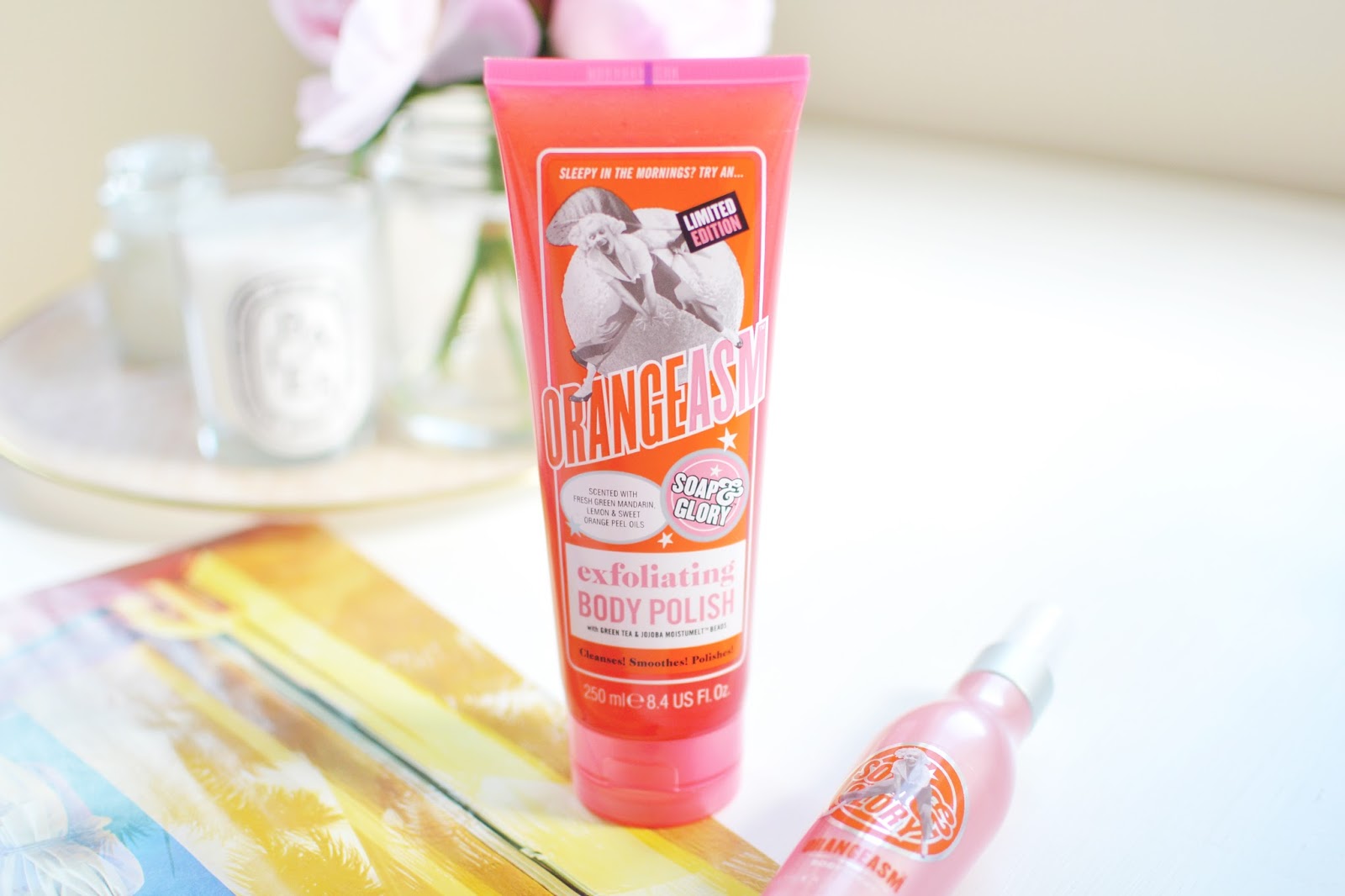 Soap&Glory Exfoliating Body Polish*
£8.00
The new Orangeasm Exfoliating Body polish is a great one for the mornings to awaken your skin whilst lightly buffing off dead skin cells. The texture is a translucent marmalade-esque jelly with small gritty bits that will dissolve.
If you find that the Soap&Glory body scrubs (Smoothie Star Breakfast Scrub is particular rough) feels too harsh on your sensitive skin, then you might find Orangeasm Exfoliating Body Polish as a better option. The particles are finer and they’re not as “scratchy”. It’s formulated with fresh green mandarin, lemon, sweet orange peel oils, green tea and jojoba to leave your skin cleansed, smoothed and polished!
It comes in a big 250ml tube for £8 which is the same price as the tubs of body scrubs, but I don’t think the polish will last as long as the scrubs. 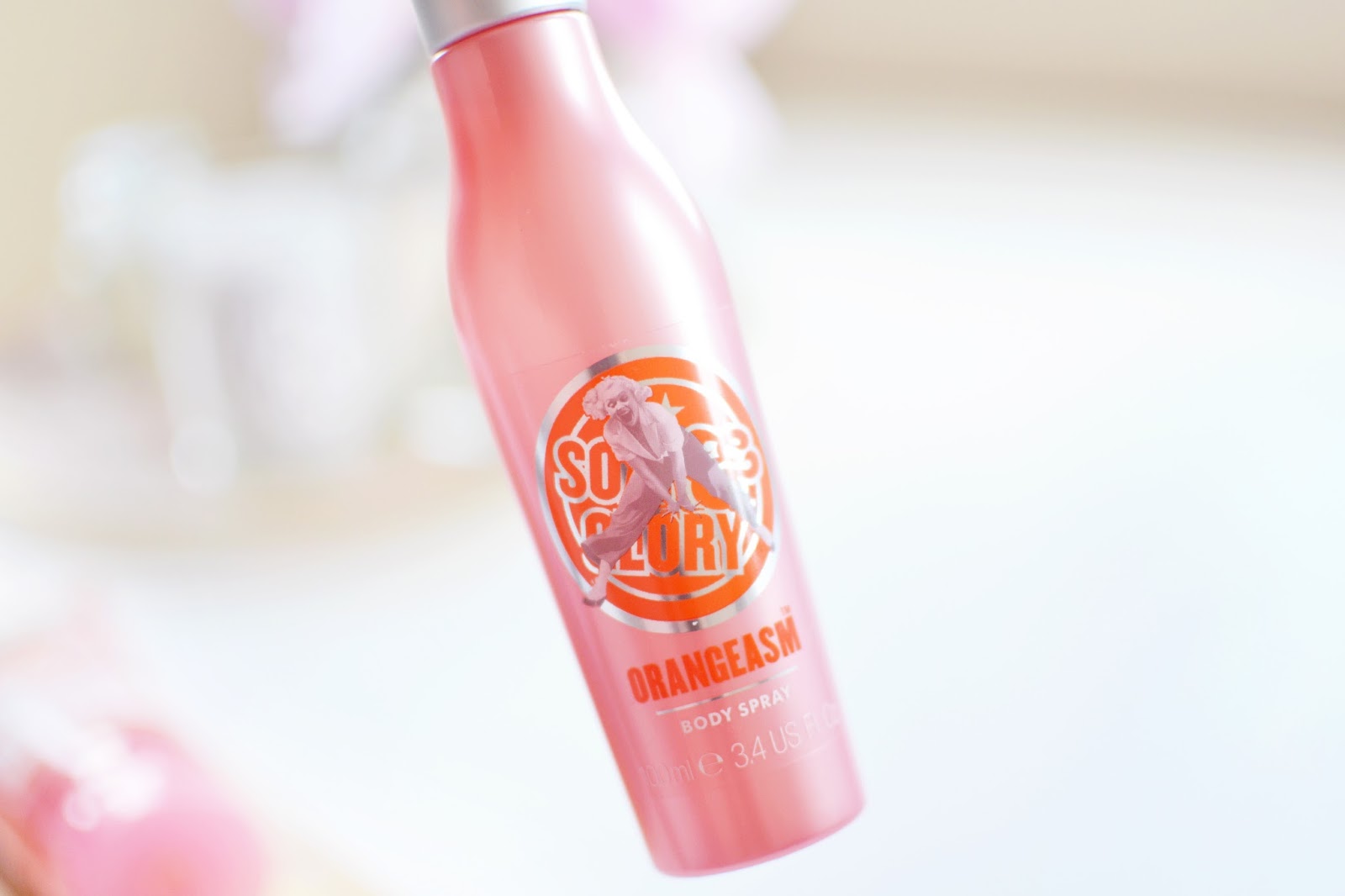 Soap&Glory Orangeasm Body Spray*
£4.00
Soap&Glory have launched several body sprays and fragrance mist in the past few weeks, including the ever popular Sugar Crush, and this Orangeasm Body Spray!
I really loved the Orangeasm Super Tonic Fragrance that they launched last year, it had mint in it which made the tonic cooling on skin. The body spray is a more basic and affordable option – it’s only £4! It’s made from sweet orange, green mandarin, geranium oil, lemon oil, orange extract, mint, patchouli and petitegrains.
Now that they’ve released a Sugar Crush body spray, I have to say that that’s my fave! Both are really nice scents but I would choose Sugar Crush over Orangeasm as the ultimate fruity Soap&Glory fragrance any day!
▴ Follow Me On Twitter ▴ Like My Facebook Page ▴ Follow Me On Bloglovin ▴

7 Awesome Beauty Stocking Fillers - All For Under £45
Current Favourites
Jurlique Petite Hand Care Set
FACE The Day With Balance Me
Share this post: