Tablets are one of those products that we don’t really need but once you get one, it’s surprising how attached you become to it. It is no wonder we’re so hooked when it has the abilities to entertain, educate, socialise and work from it. I clutch on to mine everywhere where I go!
I’m one of those (annoying) people who’s super loyal to Apple products, and I have to admit that when I have my heart set on an Apple device, I won’t even look at alternative products. Call me simple but I love how easy Apple products are to use and they do last a long time until they eventually die on you! (All good things must come to an end! *Sob*)
However, in the last couple of years though, I have had a gripe at their increasing prices (haven’t we all!) and this naturally enabled me to look elsewhere for an alternative. There are so many different options now, all the brands are doing a brilliant job catching up with Apple. I’ve actually found myself avoided going in to the Apple shop for a while… I still love them but I’ll part ways for now until y’know, I win the lottery or something! Ignorance is bliss!
This past fortnight, I have been cheating on Apple with Gigaset QV830 tablet*, and here’s the lowdown!

To start off with, it only comes in black and 8GB storage space. This will save you time in pondering about which colour to buy and which spec to go for!
Size wise, the Gigaset Tablet has an 8″ screen and is really similar to the iPad Mini which measures in at 7.87″. I’ve placed a nuuna notebook between them to show that it’s as neat and compact as an actual notebook. I like the size of these types of tablet which fits in to your bag and is lightweight to hold and carry around with you wherever you go. It was really easy to set up too – that’s the bit I dread the most so I was happy to get this part out of the way, but it wasn’t as painful as I thought it would be! Upon switching the Gigaset QC830 Tablet on for the first time, it guides you through a step-by-step on how to connect with Wi-Fi. It also connects a lot of things to your Google account, so make sure you’ve already signed up – it will make things a lot easier, but not to worry if you haven’t got an account! You can set one up there and then!

I’m really not familiar with Android and it took me days to get used to it which, of course, was slightly frustrated. Once I got to grips with the navigation, the Tablet became more personal to me as I added my favourite apps via Google Play Store. I had exactly the same as the ones I’ve got on my iPad: Chrome, Facebook, Instagram, Pinterest, Twitter, Tumblr, 4oD, TV Catch Up, YouTube, and all the other apps that keeps me entertained! I could do the exact same things from my usual @tempsec accounts but one thing I didn’t do was install the apps I’ve already paid for on App Store such as like AfterLight and A Beautiful Mess because I would have been required to pay for them again via Google Play, so I just left those for now.

If you’re a blogger, you might be interested in the Blogger app. Personally, I don’t write my blogposts from smartphone or tablet devices, I find it incredibly limiting and difficult to keep everything aligned and uniformed – but the choice to use the app is there is you need it! It might come in handy to draft rough ideas when inspiration hits you while you’re on the go.
From the Chrome browser, I could continue to read blogs and articles, and leave comments or join in with discussions. 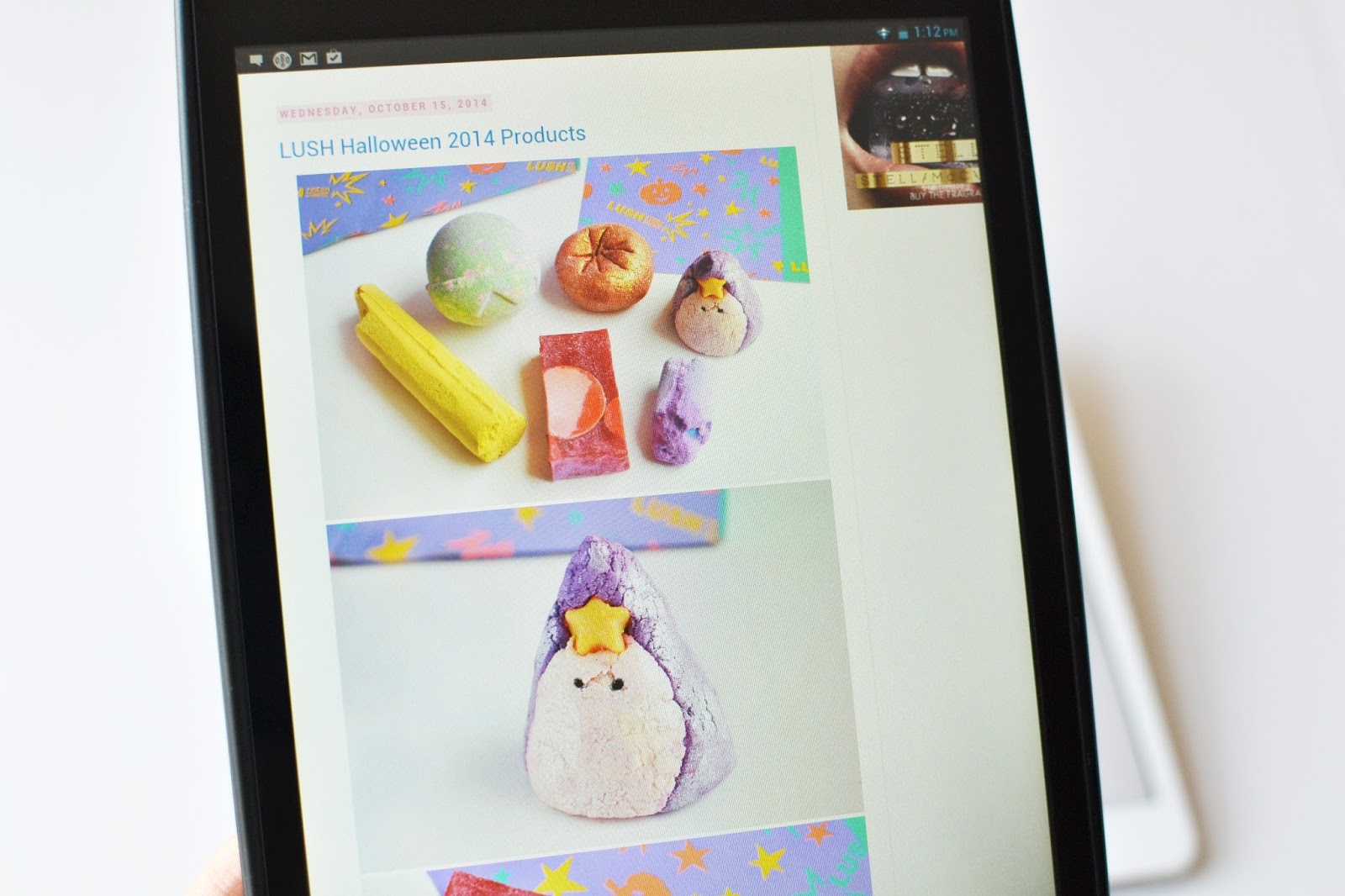 The screen resolution is decent at 1024 x 768, and 160pixels per inch. It is touch screen with all the intuitive and responsive tap, swipe and pinch controls. There is a front and back camera too. The back camera is 5 megapixels and the webcam is 1.2 mega pixels – both which matches the same camera spec as my iPad Mini.
The battery life is supposed to last eight hours but on a full charge, I found that it lasted around 4-5 hours. Perhaps I didn’t do the things that you have to do in order to prolong battery life like quitting apps and turning down the brightness of the screen, but I struggle to make it last the eight hours that it claims. Still, 4-5 hours is still a pretty long time, so I’m happy with that!
There are a lot of specs and features that are either similar or exactly the same as the iPad Mini and you might think the Gigaset will come at an equally expensive price tag. Surprisingly, the Gigaset Tablet retails at £99.99 and in fact, it’s currently on offer at Curry’s right now for £69.99 at the moment! I think it’s a great price for a device that does so much, and you don’t have to feel guilty for buying it or putting it on your Christmas wishlist! I sure felt the buyer’s remorse when I got my iPad because it initially felt like an expensive toy as I already have an iPhone and a laptop. Although I do use it a lot for work, and it goes everywhere with me on meetings and long journeys (laptop is too heavy to carry!) I have eventually got my money’s worth! I just wish I had shopped around for an iPad alternative because if I had opened my eyes, I would have noticed that there are some great products out there for a cheaper price. I shall not be an Apple snob no more!
Now, here comes the best bit! I have one to GIVE AWAY! 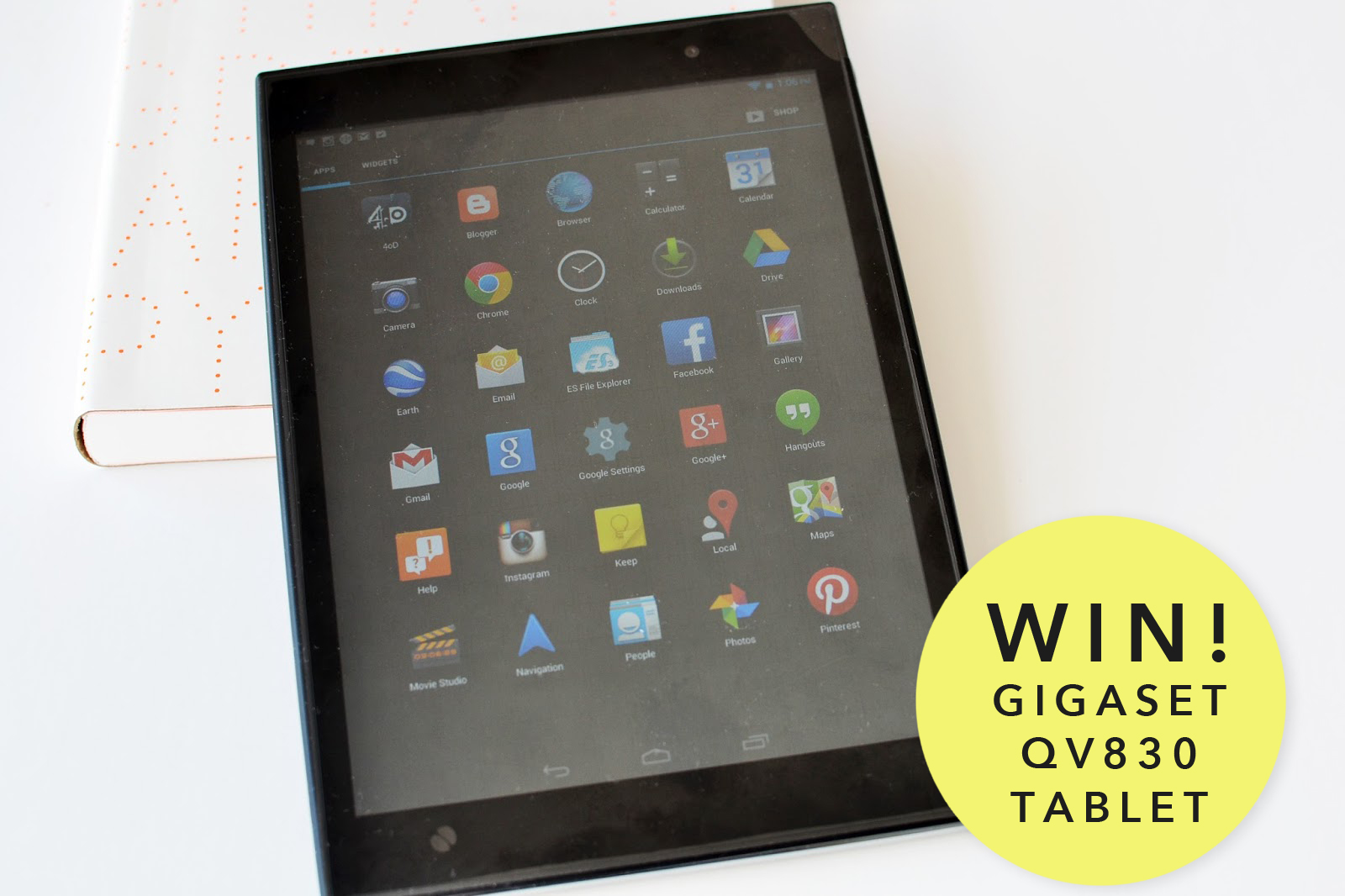 All you have to is submit your entries via Rafflecopter below!
Please remember to adhere to the entry terms as they will be moderated. The prize will be a brand new Gigaset QV830 Tablet in black and this giveaway is open to UK residents only. You can enter as many times as you want, the options will show up on Rafflecopter. The more entries you submit, the more chances to win.
a Rafflecopter giveaway
T&C’s
Competition is for the product shown above and detailed above in this blogpost (one Gigaset QV830 tablet in black). Entries must be made via Rafflecopter widget. Entries are moderated so please ensure that adhere to the giveaway entry terms. We reserve the rights to amend or withdraw offers at any time. No cash alternatives are available. Free prize draw, no purchase necessary. Giveaway will end on the date stated on the Rafflecopter widget. One winner will be selected from Rafflecopter after the closing date to receiving one box of this prize set. I will contact the winner via email after closing date, the details of which will only be used to post your prize to you. Please allow up to 14 days for delivery. A new winner will be selected if we do not receive an email respond within 3 working days. This giveaway is open to UK residents only.
Social Media Links
Follow Me on Twitter • Like My Facebook Page • Follow My Blog on BlogLovin‘ • Send Me An Email