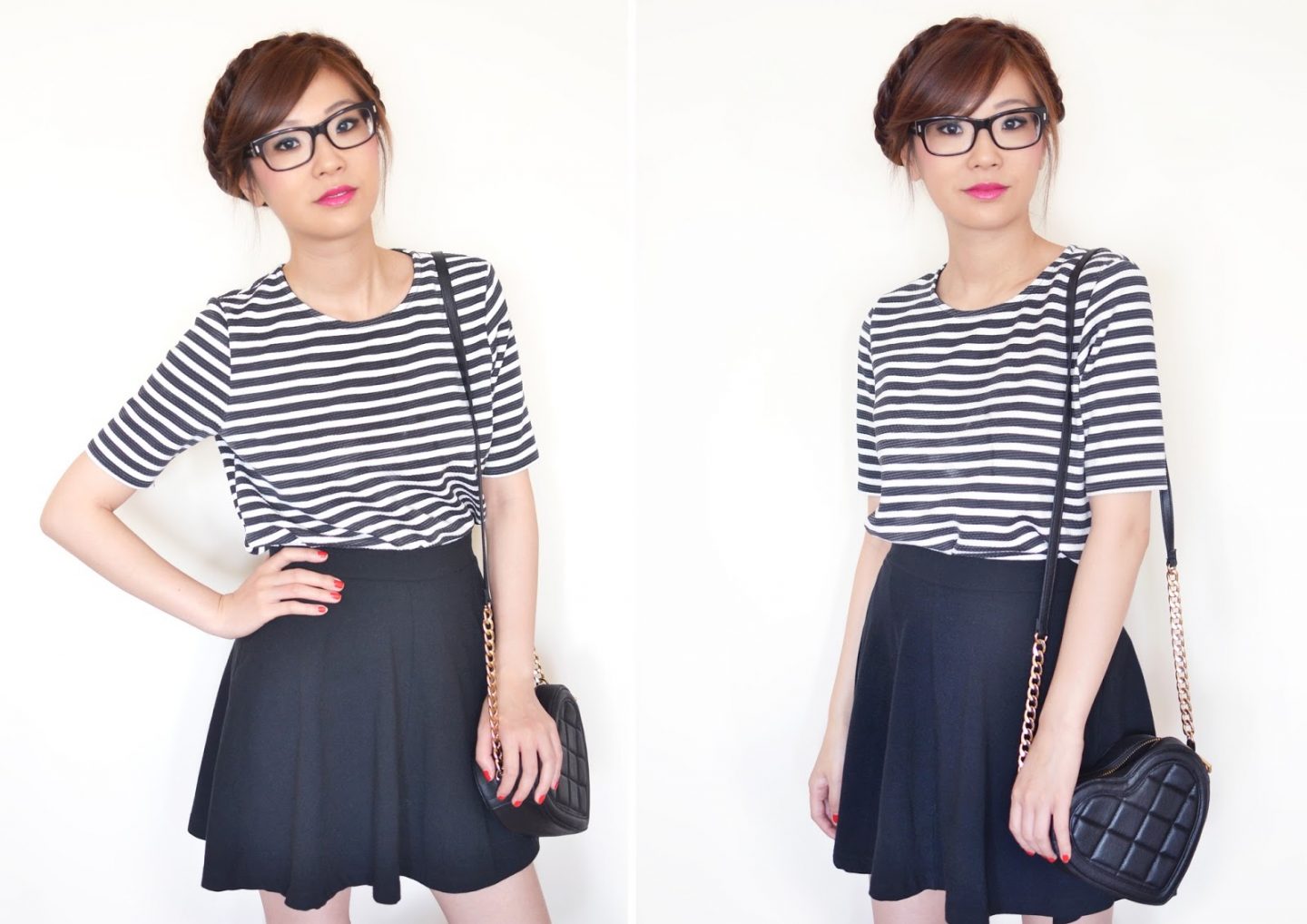 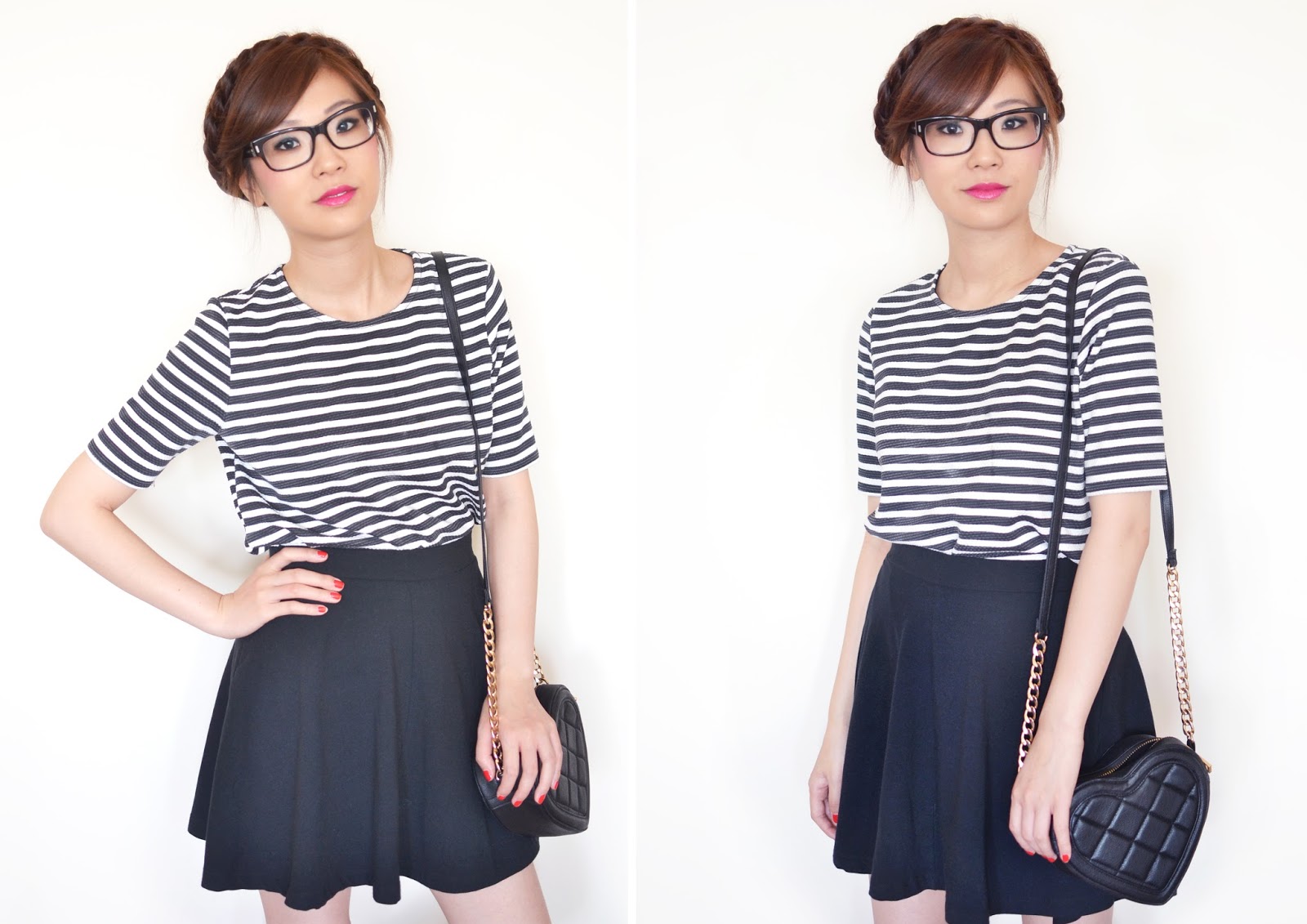 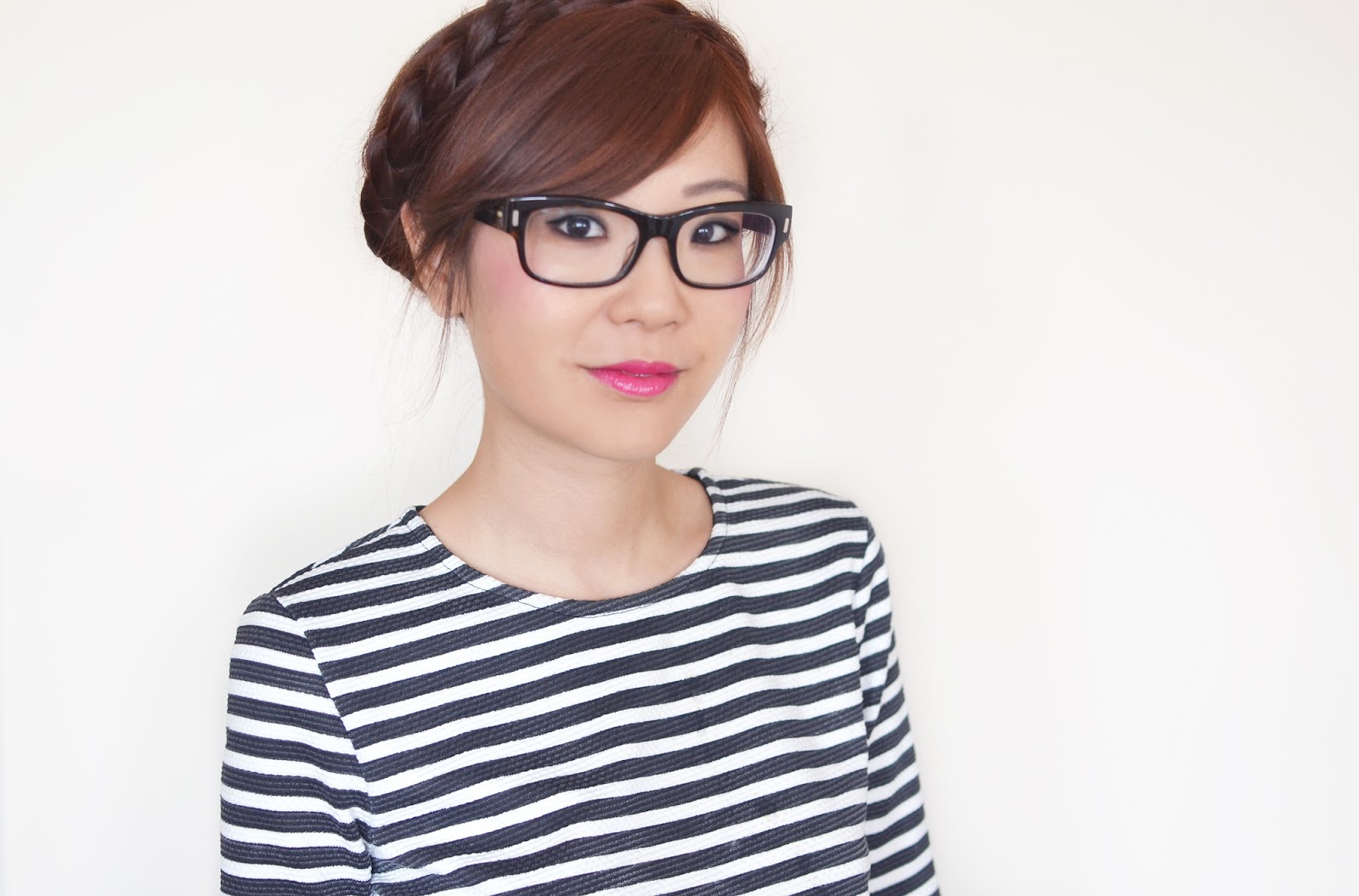 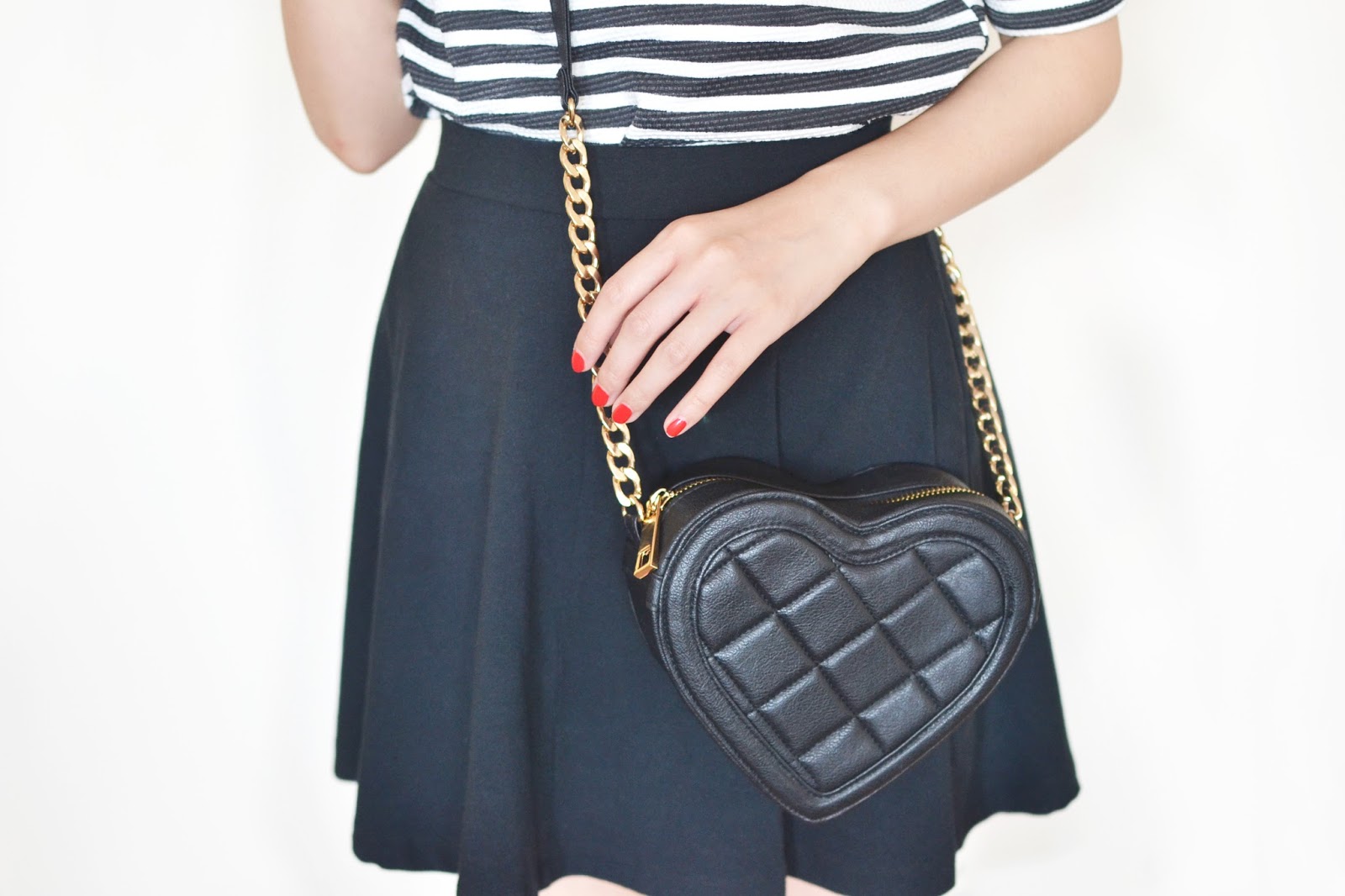 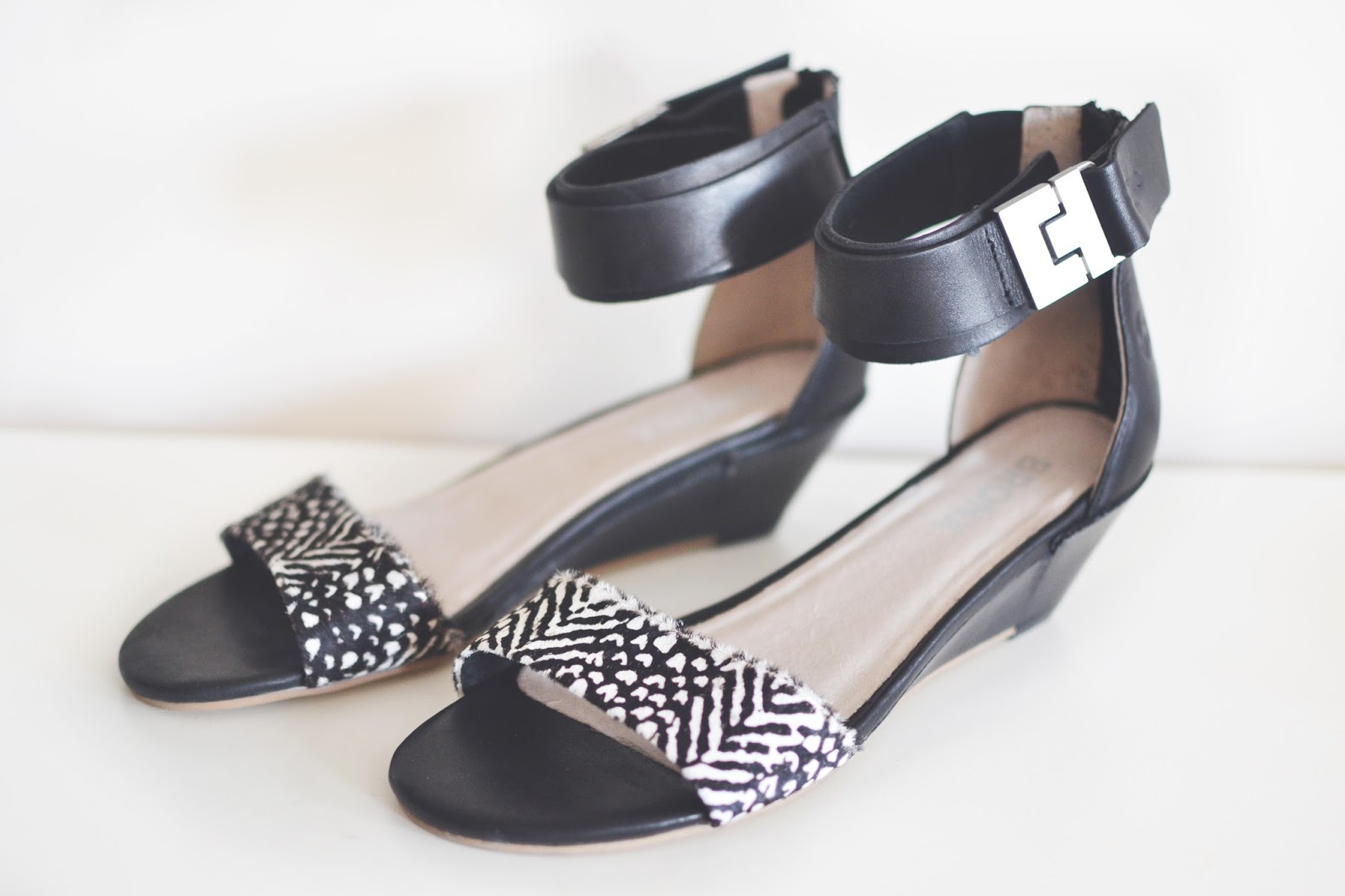 Breton Top New Look (similar here) / Skirt Topshop / Bag ASOS (similar here) / Sandals* Cloggs / Lipstick MAC Girl About Town (Read what my top 5 MAC lipsticks are)
Channelling Pugsley Addams in this outfit! (My number one style icon right there!…) I want to have a wardrobe full of breton stripes, I would have no problems wearing it every single day! I actually do need to buy another top like this actually, because there’s a a big spill on the front of this one. Ha, I just tried to look for it in the photos but my eyes went totally funny from focusing on the stripes! Don’t try looking, it’s like an optical illusion, you’ll go cross-eyed! Unfortunately, it’s really visible in real life, and it’s the honey glaze from when I cooked a gammon lunch for Mother’s Day! That day was the first time I wore this top and I didn’t realise how runny the sauce was and I accidentally flicked it all over myself when I took it out of the metal tray! Oops! Good job it wasn’t that expensive!
I went out for a quick coffee in this outfit and then I went to run some errands in town. I put on a pair of brand new shoes (a feeling that’s quite hard to beat!) which are from Cloggs, but they need breaking in, the strap rubs on my feet a little bit but they will be a lot more comfortable when they’ve softened up! The zebra pattern on the sandals isn’t one I would normally go for but it’s actually really cool once they’re on my feet, they don’t look too bad at all. I am not doing any full length shots because my camera lens is a fixed one, (it doesn’t zoom in and out) and it’s just easier to keep the camera in one spot because having to work out it’s positioning and framing is a task and a half. A flip screen would be so handy but my little Nikon isn’t as fancy as that. Anyway – hope you don’t mind about the lack of full length shots but I will still try to include photos of my accessories. I don’t think you guys want to see a close up of my feet anyway. Ewww!
A few of you have asked how I focus the camera when I’m taking photos myself using a tripod. I use a wireless remote which I got off Amazon, it’s an external one because my camera hasn’t got a built in remote function, but you simply plug it in and it works straight away. The remote I’ve got is great because it’s got multiple settings, and you can control the focus with it just like the button on the camera (ie. press once to focus, press down to take the photos) As for getting the camera to focus on the correct part…without the flip screen, I can’t actually see what is in the frame so it’s just trial and error. Snap away and ONE is bound to turn out clear! Another tip is to stick a piece of tape to mark out the spot you should stand in each time. Saves you going back and forth to check if you’re in the shot.
After work tonight, I will be watching Robin Williams’ movies – although I don’t think I can watch Mrs Doubtfire for a while. It’s my favourite and I know it will be far too emotional to watch it, it won’t ever be the same again. He added magic and laughter to our childhoods and it is incredibly sad that he not part of this world anymore.
Social Media Links
Follow Me on Twitter • Like My Facebook Page • Follow My Blog on BlogLovin‘ • Send Me An Email