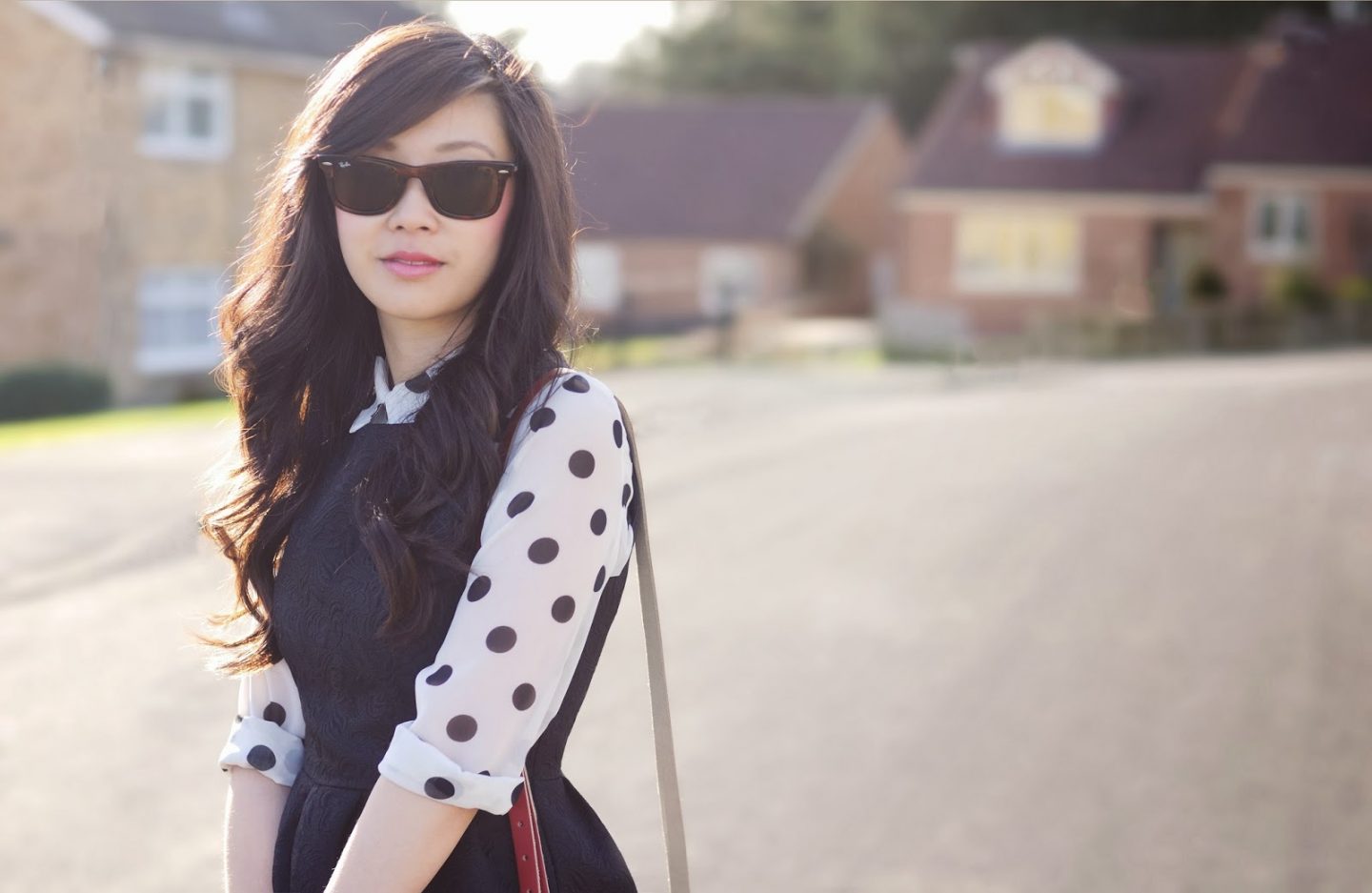 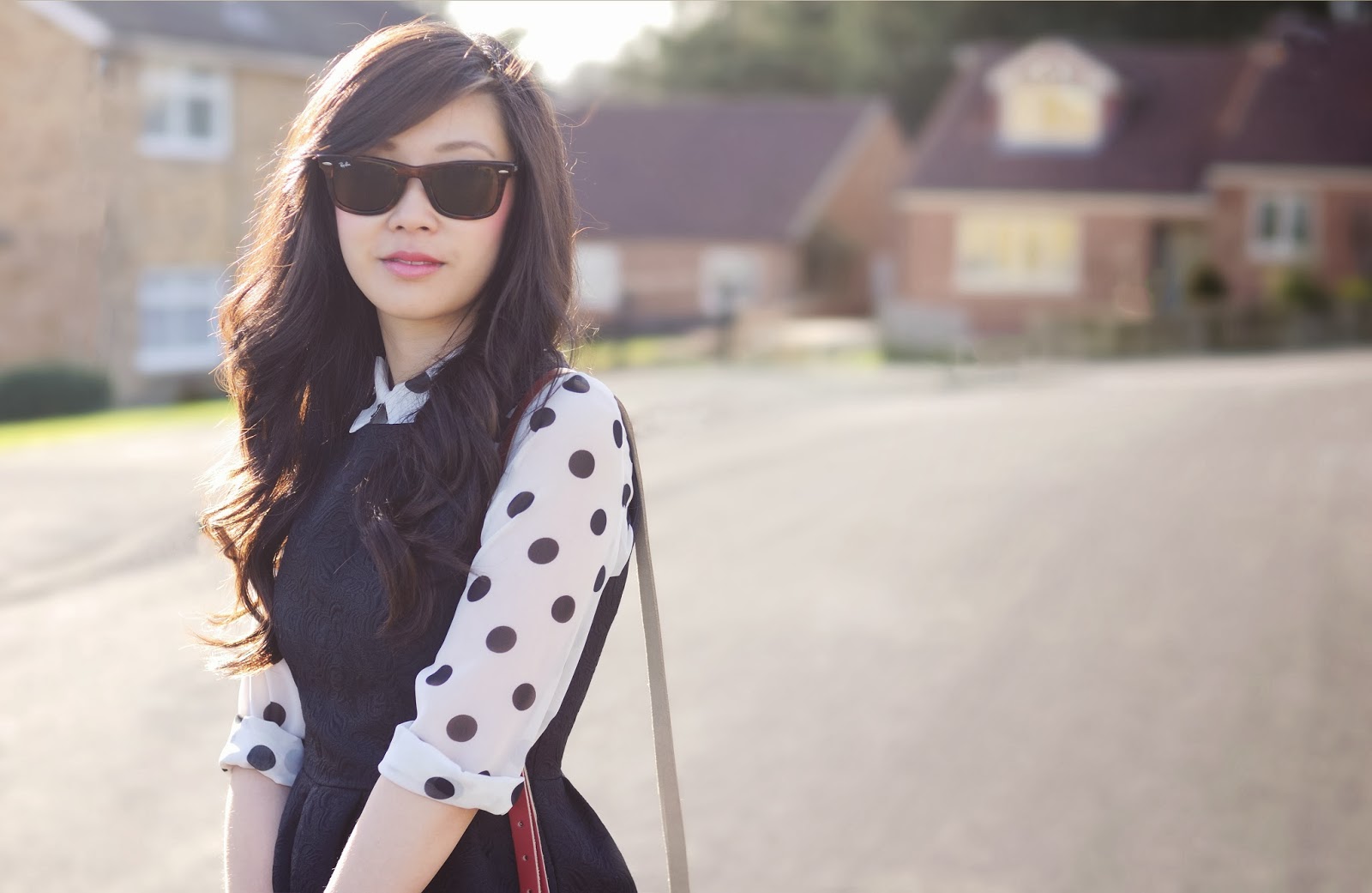 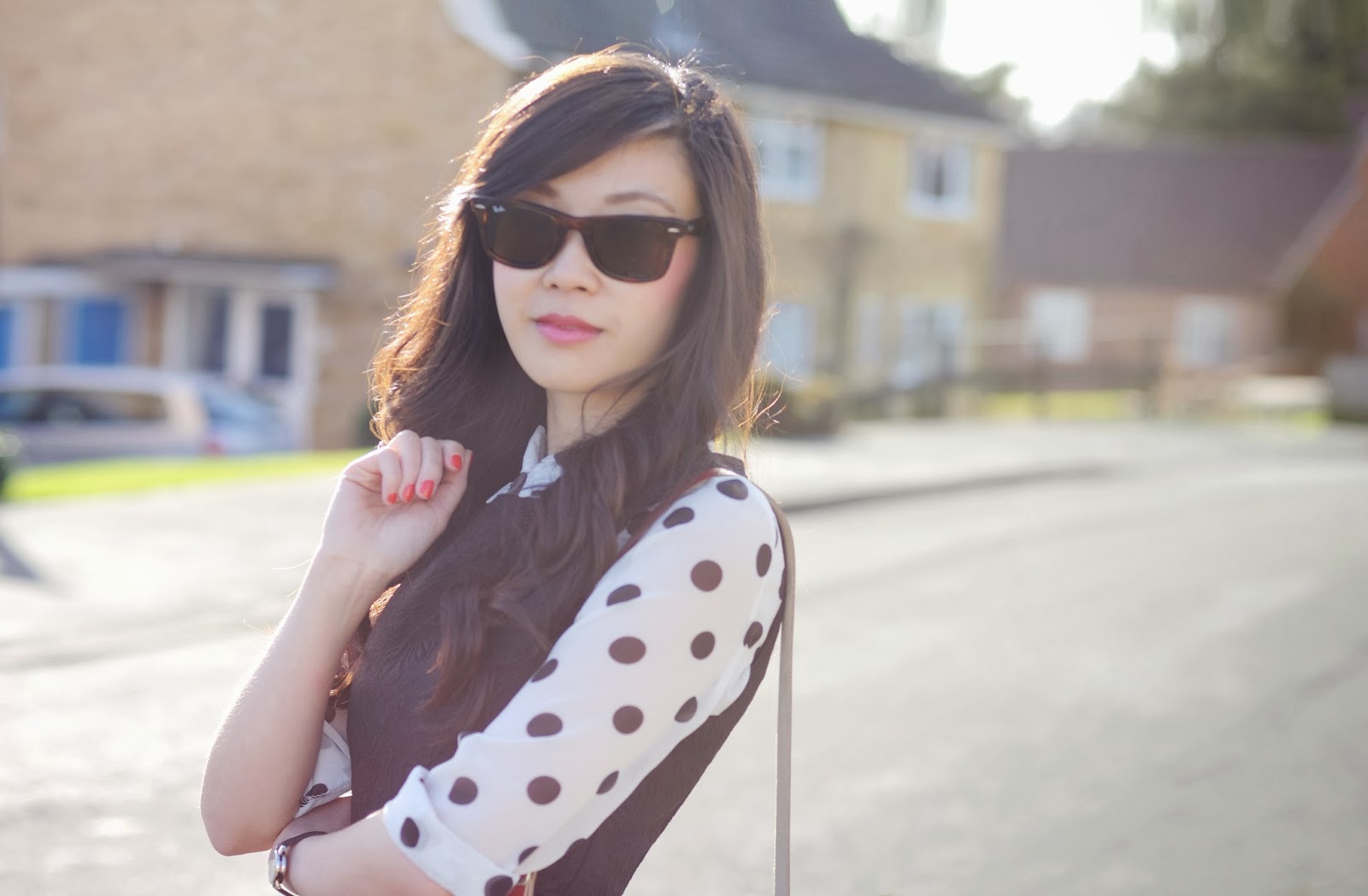 Dress* Persunmall / Shirt F&F (old) / Bag* Brit-stitch / Sunglasses* Rayban via Pretavoir / Shoes Kurt Geiger
Another monochrome outfit here with a pop of colour coming from my red leather bag. It isn’t a pinafore dress, you can wear on it’s own but I hate my arms and I try not to wear anything sleeveless so I’ve layered with an old F&F shirt that I got last year.
Do you ever have those moments where you get the urge to get rid of everything in your wardrobe and replace it all with brand new clothes? I’ve been having one of those weeks where I’ve looked for something to wear and NOTHING seems right. I don’t actually buy clothes that often and I seem to just wear the same thing all the time and I’m pretty bored of it now. Ultimately, the reason for this is that the clothes I’ve got (which I’ve kept for years) are just out of fashion. Plain and simple. Fashion is moving quicker than ever and I actually hate that! Well, I don’t exactly hate it – but it’s a bit of an inconvenience when you don’t have spare money to spend on all the pretty things! I mean, I for one, don’t have the money to splash out on clothes all the time so when I do, I’ll buy plain items, or something which will last longer than three months. For instance, that’s probably why I’ve not bought a pastel coloured coat, I don’t want to spend lots of money on one item only to jump on a trend that will be out in three months time! In the grand scheme of things, it isn’t important and it doesn’t really matter but lately, I’ve been feeling like I’m a bad fashion blogger or I’ve let you guys down because I don’t blog about new clothes or hauls. Since moving in to my own place, I have been a lot more careful with how I spend my money. Boo to being a grown up and a boring old biddy! I’ve always tried to offer outfit ideas on how to wear staple items but I don’t push my blog further enough, it doesn’t feel fresh or new. I mean, if I’m feeling bored with my clothes then you guys must be sick to death of seeing the same items all the time! I’ll work on that…!
A quick side note: I’ve joined Tumblr (Again) Here’s the link http://tempsecblog.tumblr.com/. This is my third go, and I think I’m finally starting to understand how to use it but I find it difficult to find “real’ people on there. Whenever I click on the recommended blogs, it shows up with lots of brands and celebrities but I am not interested in them whatsoever. I want to follow real people, you guys are the ones that I can relate to! So, if you have a tumblr, let me know what your link is and I’ll follow you!
Social Media Links
Follow Me on Twitter • Like My Facebook Page • Follow My Blog on BlogLovin‘ • Send Me An Email

49 thoughts on “What I Wore: Jacquard and Polka Dots”