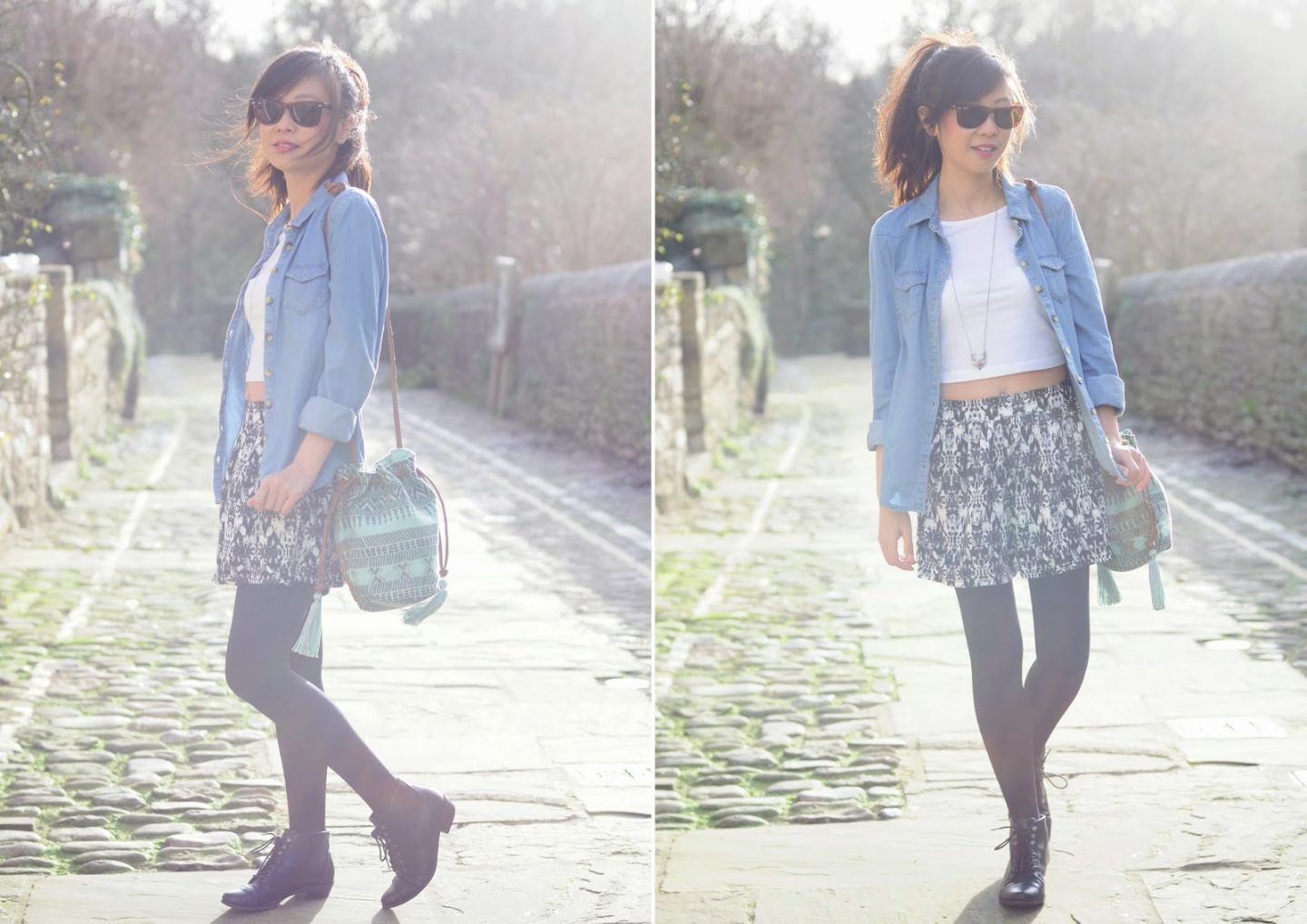 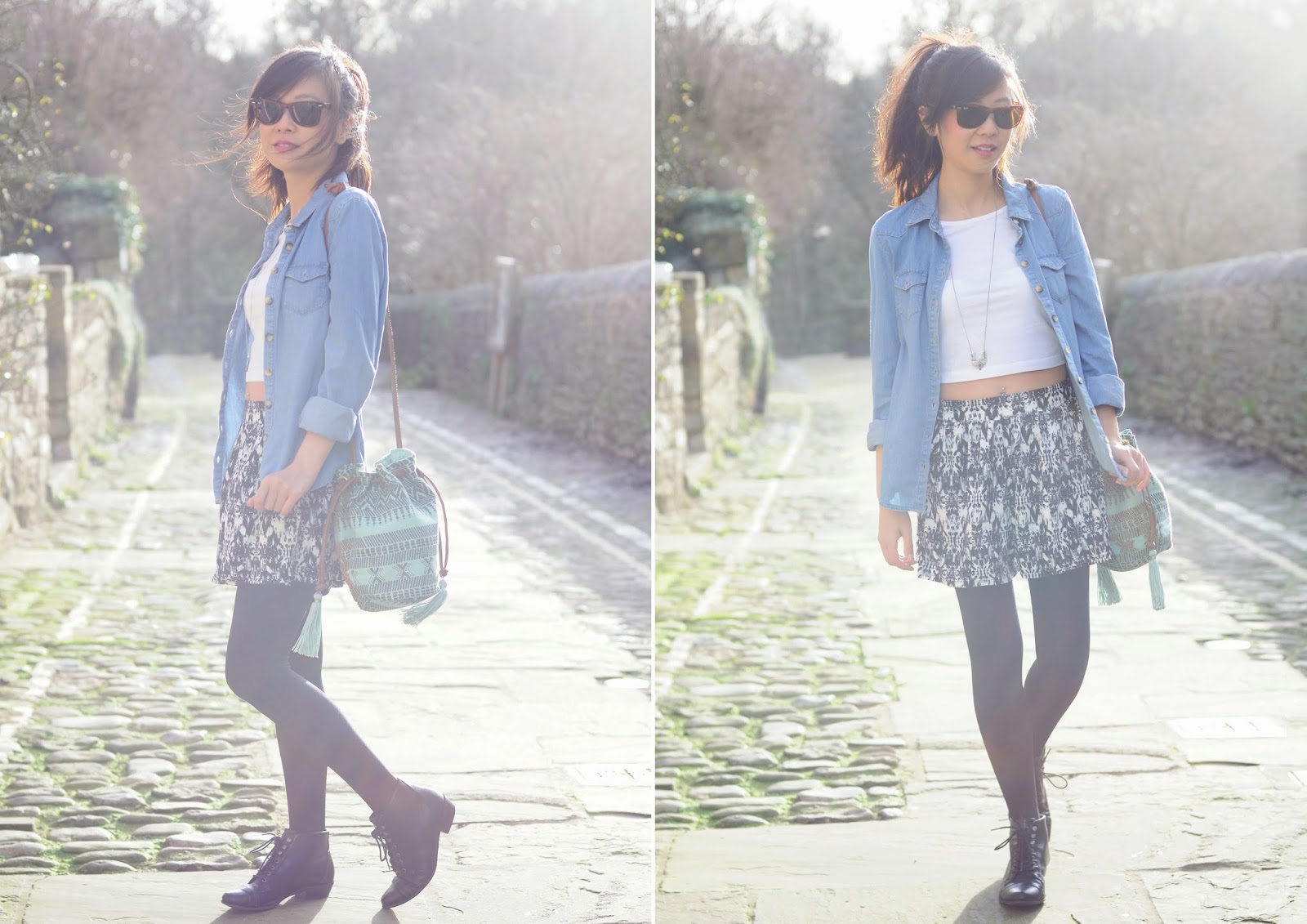 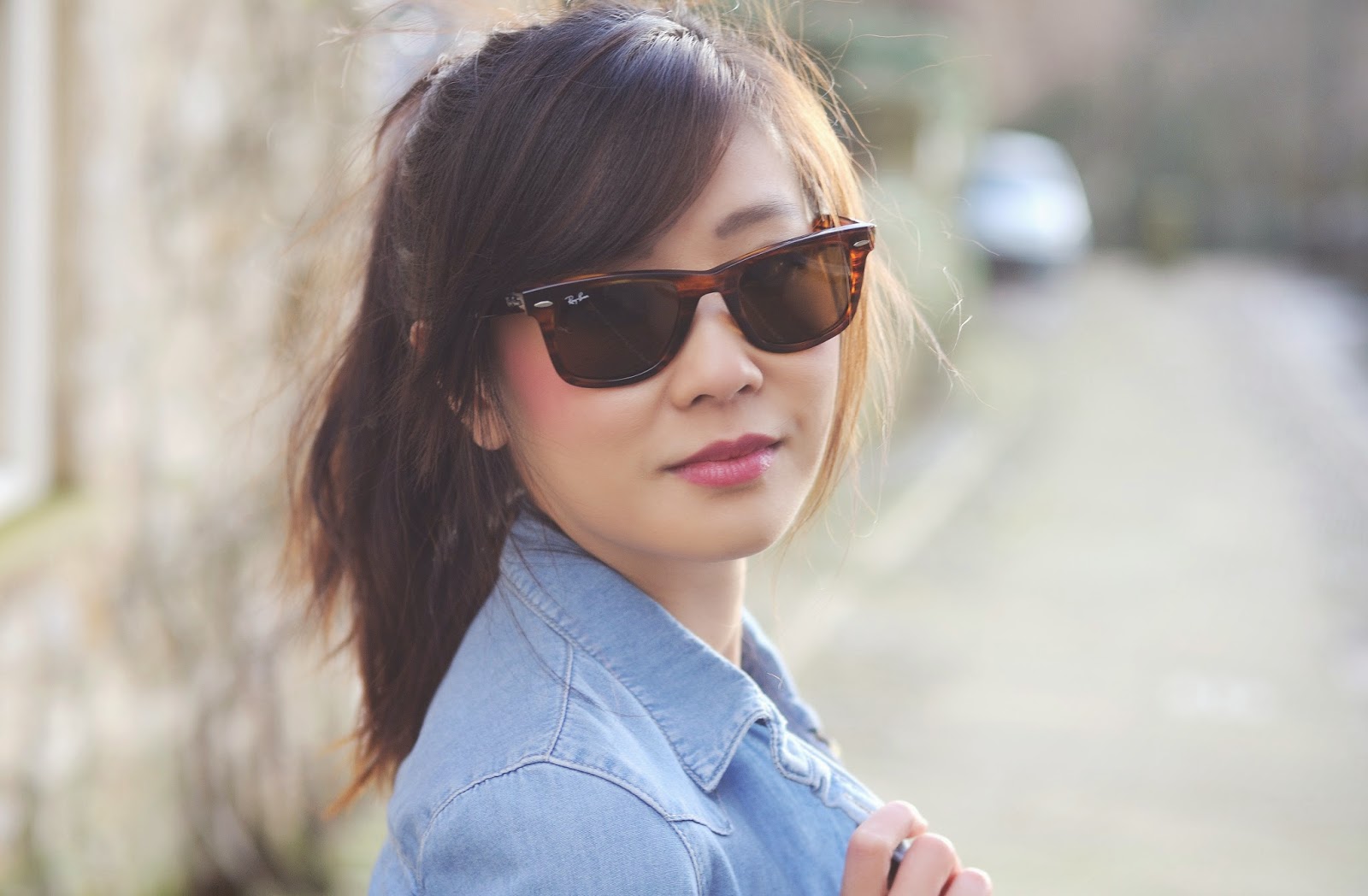 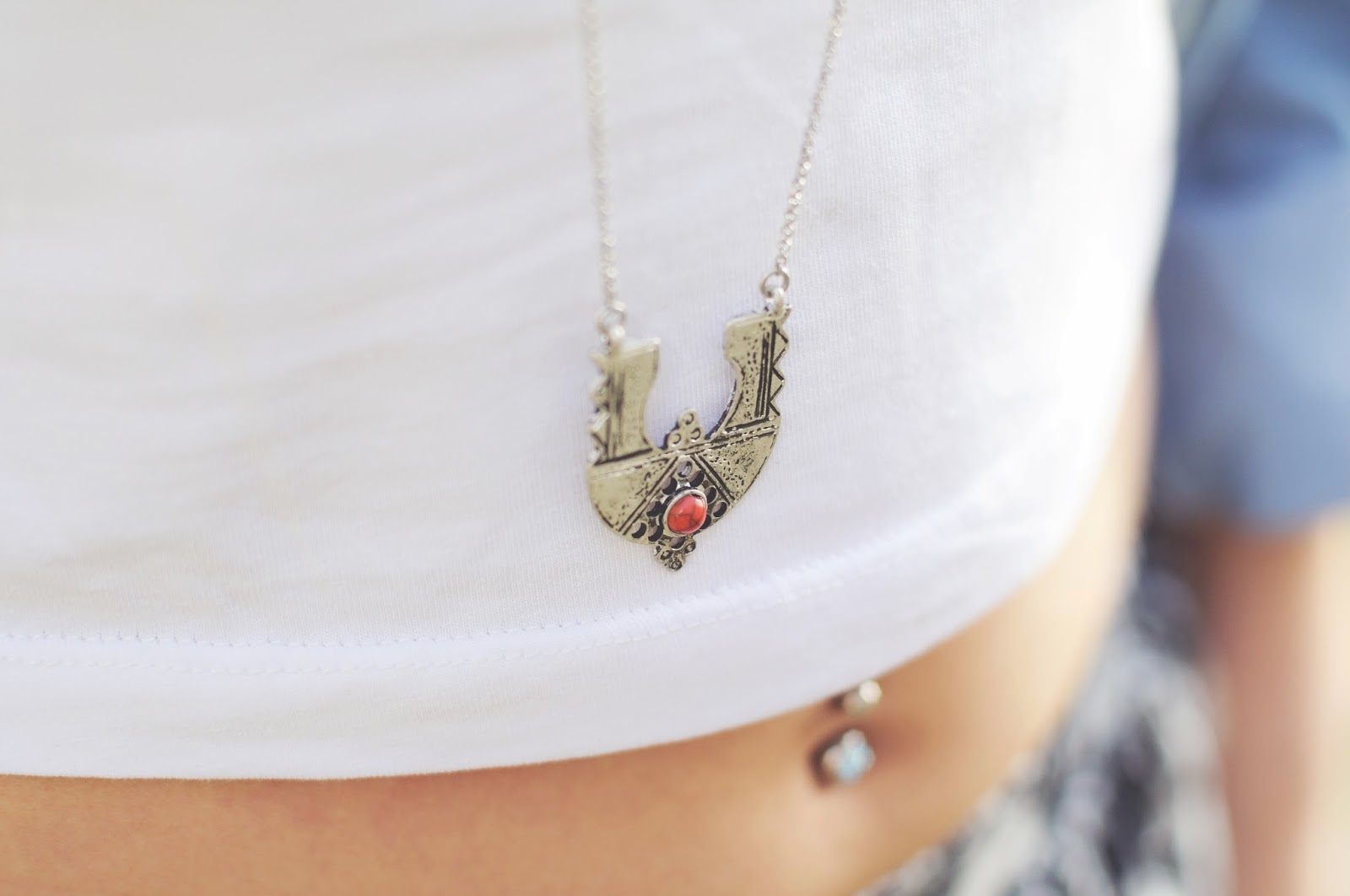 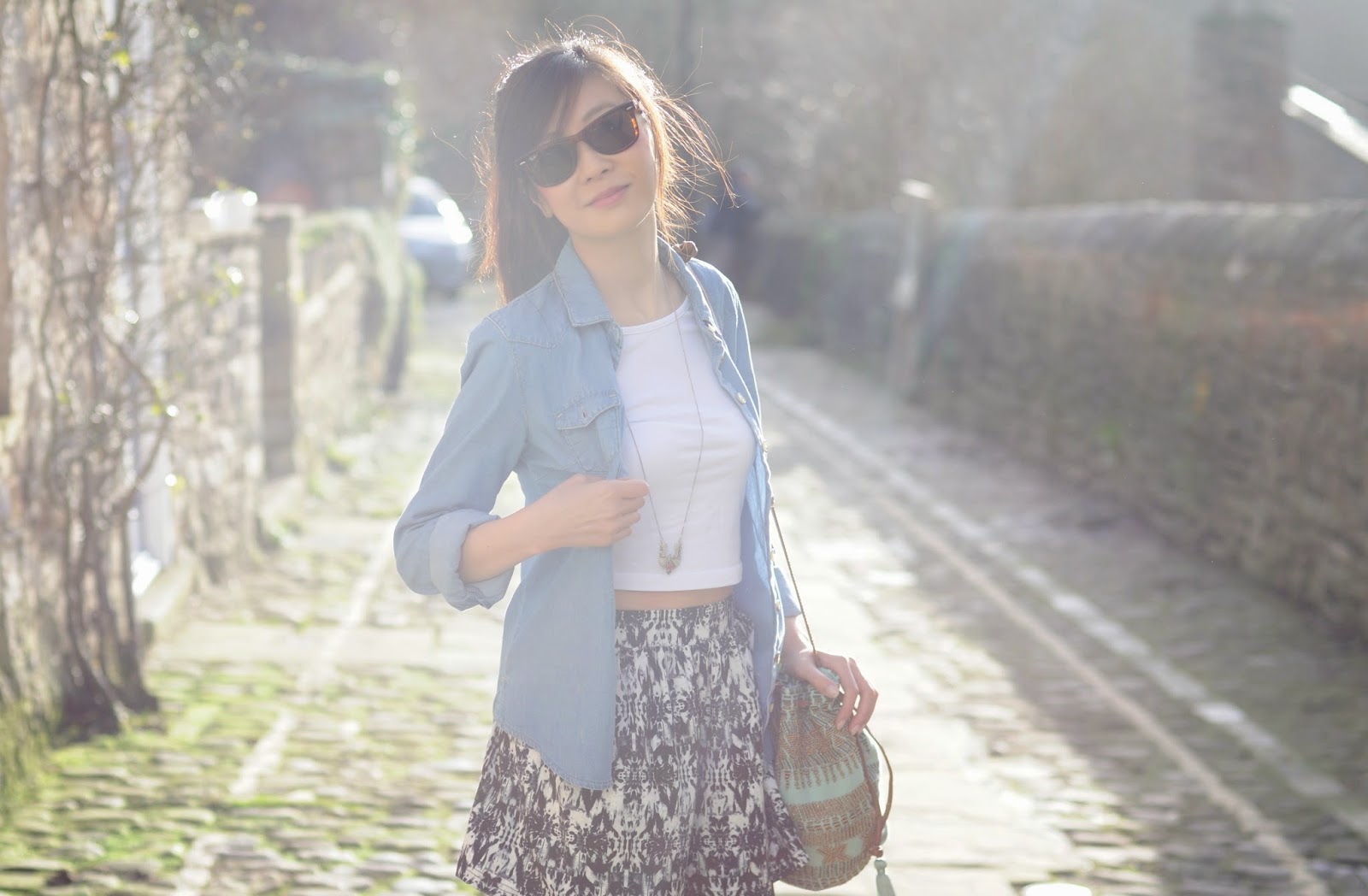 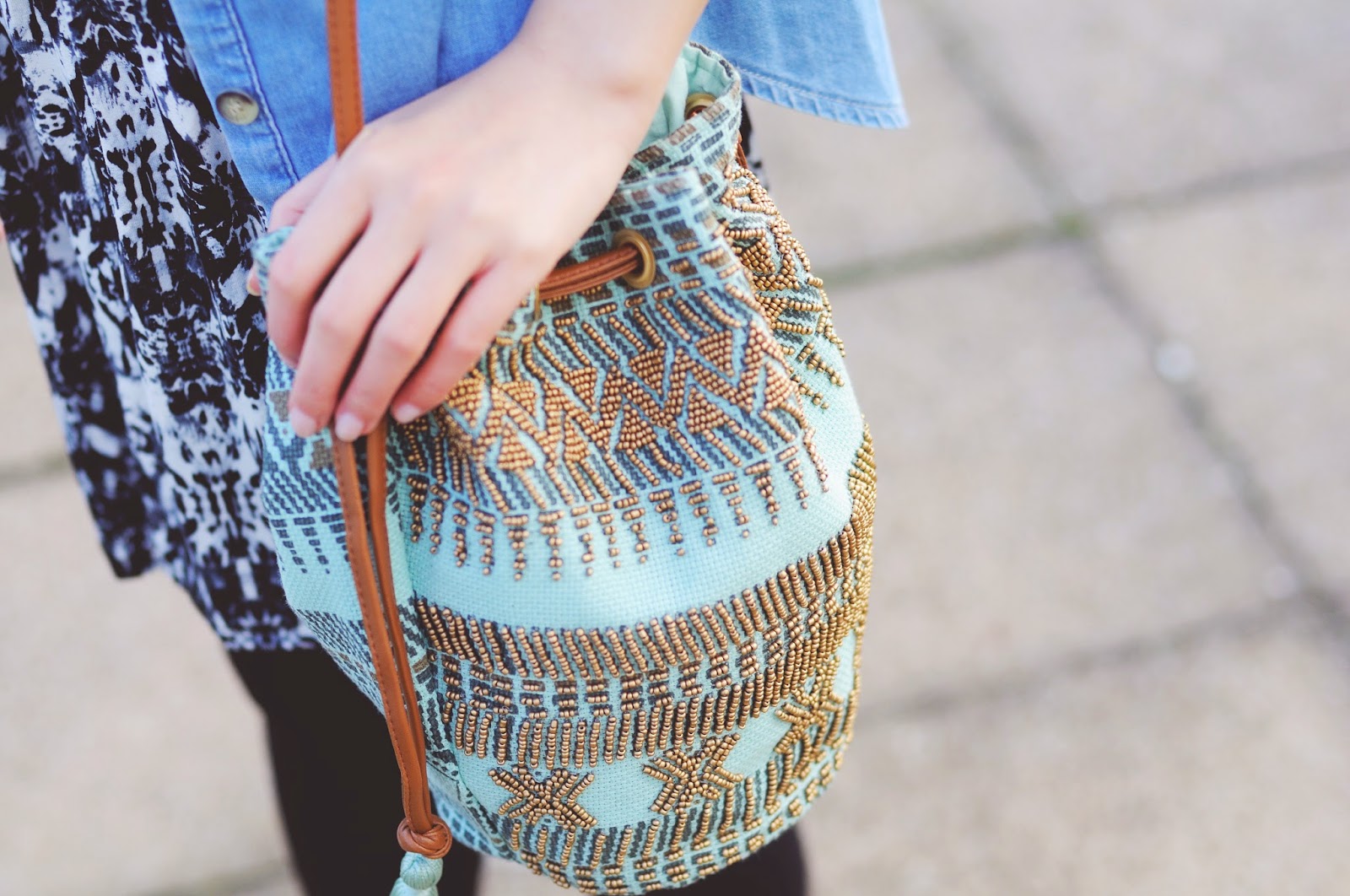 Denim Shirt Topshop / Shorts* ASOS / Cropped Top ASOS / Bag ASOS / Necklace ASOS / Sunglasses RayBan / Boots Office
This is the second ASOS Spring Summer 14 trend challenge with those black and white tribal shorts! When I uploaded this to social media, most of you said that this one was your favourite out of the three looks. I’d have to say that it has been many years since I have dressed like this, I felt like I had reverted back to my early 20’s when I opted for a more casual style, a time when I wore blue denim a lot.
I felt a bit cray cray going out in a white cropped top in the middle of winter when these photos were taken for ASOS two weeks ago. From the photos, you may have spotted that I got my belly button pierced but I don’t wear cropped tops enough to show it off. I got it pierced in 1999, I think! I was a teenager, and I used to wear teeny tiny tops like Britney Spears. In fact, I actually got my belly button pierced because Britney got it done aswell, and I had read in one of her magazine interviews that getting it pierced didn’t hurt. I was such a mega Britney fan girl back then! I remember feeling an impulse urge to do something rebellious and I went to town and got it done without my Mum knowing. I was really daring and ballsy back then (or just plain stupid. Not sure which one!). Why am I such a boring old fart now!
Anyway – back to the outfit! – I must have a short torso because this top doesn’t seem cropped enough for me, or maybe it’s suppose to be one of those that’s suppose to just skim across your midriff. If it’s the latter, then I’m not too keen because it just looks like my top has shrunk in the wash and it has ended up being too small for me. I might look out for a top with a proper cropped fit, perhaps they’ve got some tops in Topshop! I’m still on a spending ban so I won’t look on the topshop website yet but I really want to wear more stuff like this in the Summer time! Actually, come to think of it… the ASOS top I’m wearing looks fine, but the problem is that my culottes are too high-waisted!
Hope you’ve all had a good weekend! I spent this weekend eating so much! My birthday was on Friday and we had gone to M&S to take advantage of those Valentine’s Meal Deals. We ended up getting so much cake, sweets, sugary drinks and snacks, so all I’ve done is veg out. I better cut that out if I want to look good in bloomin’ crop tops this Summer!
Social Media Links
Follow Me on Twitter — Like My Facebook Page — Follow My Blog via BlogLovin‘ — Send Me An Email