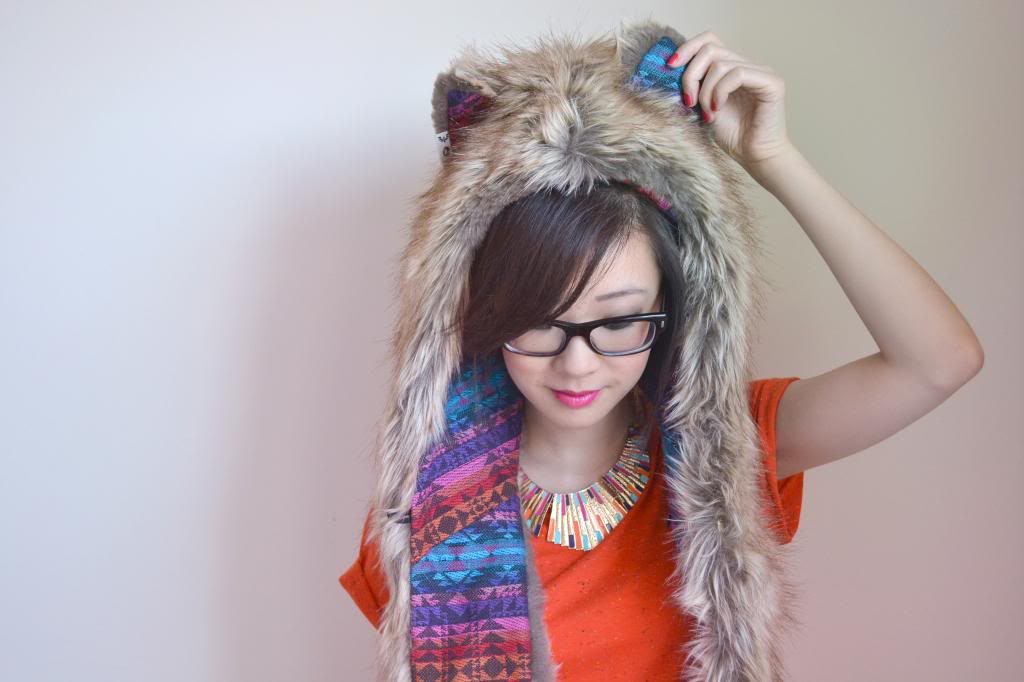 SpiritHood is a company with a big heart for endangered animals. I was sent a SpiritHood from their new Spring/Summer range and I chose the Coyote which is similar to the wolf one I featured on the blog last year, except you can plug your ipod in to one of the pockets and the music plays out of the built-in washable speakers! That’s all kinds of cool, isn’t it? I’m going to be honest here and tell you that I was sent this hood to style as part of a competition they’re hosting on Facebook where the person who gets most “likes” wins a trip to Alton Towers and lots of other wonderful prizes. BUT I’m not going to tell you to go over there and ‘like’ my photo. You should go over to their Facebook page and vote for whoever you think looks the best! At the end of the day, it shouldn’t matter if I ask for ‘likes’, it should be about who looks the best. May the best (stylish) girl win, that’s what I say!

What I really want to do is highlight the fact this company donates to the conservation of endangered species. It used to be through SpiritHoods purchased through their ProBlue label but as far as I am aware, this has changed and now with every purchase, SpiritHoods will donates 10% of net profit to non-profit animal conservation. It’s pretty amazing what they’ve already done, really inspirational how passionate they are about the causes.

I’ve featured one of their A/W 12 designs in September and mentioned that the hood was a gift but I made the 10% donation of the RRP to one of the charities. I chose the Panda International and received THE CUTEST Christmas card from them last year with a newsletter on how everyone’s donations has helped to protect and conserve the species. It was a small gesture but it was such a special card and it completely made my day. It was just really really lovely. They reassured us that the pandas were getting treated to lots of bamboo to eat and staying healthy! I’m giving my new Coyote hood to my little sister, she loves it and is going to donate some money to the Polar Bears. She learnt about global warming at Primary School and made up a song about Polar Bears!

SpiritHoods are expensive, I know (but they do make a special gift at Christmas/Birthdays) and there are cheaper imitations on the high street, but by supporting SpiritHoods you can rest assure that you’re getting a quality-made, long lasting product with a good mission behind the brand.


SpiritHoods exists to encourage people to express themselves, live life to the fullest and inspire positive change.