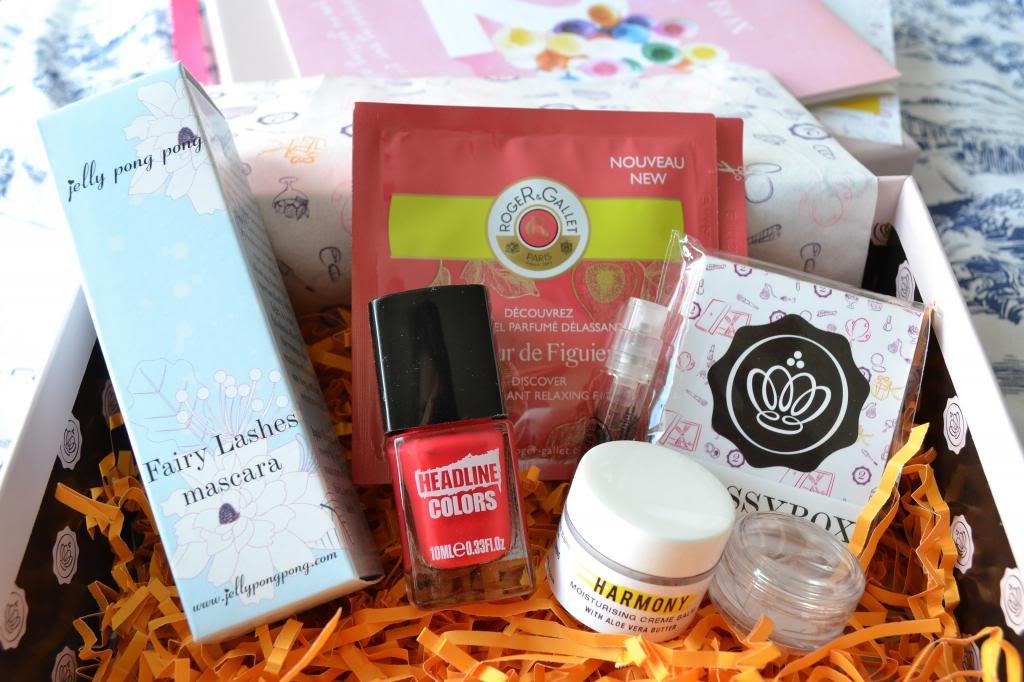 Happy 2nd birthday to Glossybox! I still remember the hype of Glossybox even before they launched and since then, there has been other beauty sample boxes that have been and gone but Glossybox has always been the one I recommend to friends. They don’t always get it right but it has been interesting to see how they have handled it and how they’ve kept us all interested. The May 2013 Glossybox* arrived through the post last week and when I opened it, I couldn’t believe that they’re only two! It just seems so much longer than that. I got a bit bored of them in the middle of last year but the past three or four editions have been great!

In my Glossybox this month, I received the usual 5 samples and also a bonus item. The biggest item was the Fairy Lashes Mascara from Jelly Pong Pong which was packaged in quite a large box. I didn’t find this mascara lengthening but it did add volume to my lashes without clumping. It applied easily and it is waterproof. This is a full size product and cost £15.00.

I got a small pot of Harmony Balm by Premae which smells really strong. It’s a zingy, fresh lemon scent with a hint of medicinal fragrance. It smells a bit like chinese medicine, and if you’ve ever smelt this, you’ll know how distinctive it is. I’m worried it’s too strong and that it isn’t a fragrance that is to everyone’s taste, so if I put this on during the day, I’m sure no one will want to sit next to me!

The next item is a primer from Beautiful Movements Cosmetics. This is the little pot with the see through liquid in it. I have received a lot of samples from this brand via Glossybox and they tend to be loose powders which I’m not a fan of. I didn’t know until now that Beautiful Movements Cosmetics is Kimberly Wyatt’s beauty range. The small pot of primer is gel-based and I used to love this type of primer, it makes your skin feels really smooth. You can use this product in multiple ways such as mixing some eyeshadow in to create a liquid eyeliner. I haven’t tried this yet but I’m a bit dubious because the product feels quite slippery.

The contents also included a bottle of Headline Colors nail polish and a sachet of body lotion and shower gel, which smell SO nice. Lastly, as a bonus gift, there was a pack of nail files which will come in handy as there are 20 nail files in the pack. A nice little extra to complete their second birthday edition!

Shay & Blue English Cherry Blossom Perfume
Mandara Spa - Bath and Body
Make-Up Tips For Glasses Wearers (With Before & After Pics)
4 Too Faced Products You Need In Your Make-Up Bag
Share this post: